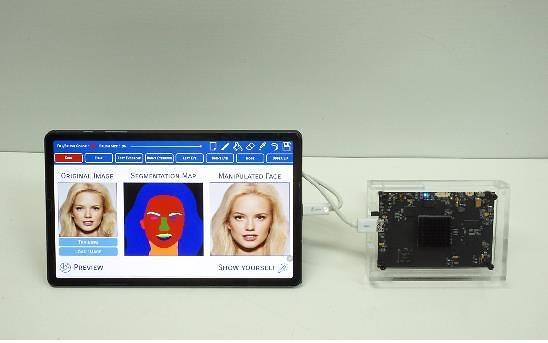 
SEOUL -- Using an artificial intelligence chip, South Korean researchers have created a face correction system that automatically fixes or completes features such as hair, glasses and eyebrows when asked to be added or erased from a picture taken with a tablet camera.

A generative adversarial network (GAN) is a class of machine learning systems. CANs, which are made up of several deep neural networks, can be used to create photos of imaginary fashion models or portraits, landscapes, and album covers.

it is difficult to implement CANs on small mobile devices with limited computational capabilities. To implement AI technology in mobile devices, low power is required for high-speed operations to prevent battery explosion.

The state-run Korea Advanced Institute of Science & Technology (KAIST) said that a research team led by Yoo Hoi-jun, an electrical engineering professor, developed a CAN processing unit (GANPU) capable of handling multiple deep neural networks on low-power mobile devices. It is possible to self-learn CANs within a mobile device without sending data to the server.

"By expanding the area of artificial intelligence utilization in mobile devices, it can be applied to applications that can transform image styles, synthesize images and restore images," Yoo said.