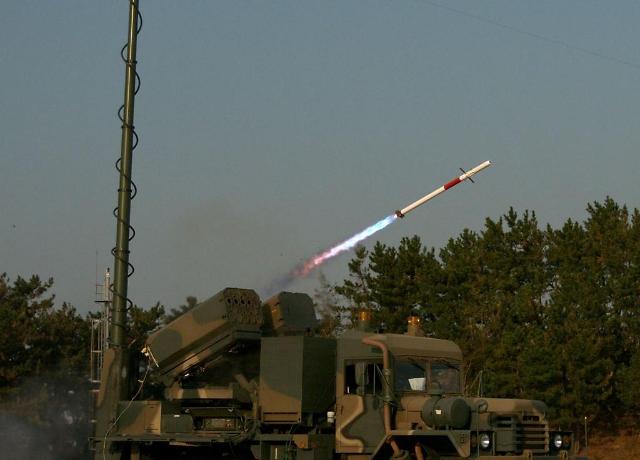 The system, known as Bigung in Korean, passed a flight test in October last year under observation by a Pentagon evaluation team, the Defense Acquisition Program Administration (DAPA), a state body controlled by the Defense Ministry, said in a statement on Tuesday.

To enter the U.S. arms market, items and technologies of foreign allies must pass the Pentagon's foreign comparative testing (FCT) program. At the test center of the Agency for Defense Development (ADD), a state-run defense technology research body, the Poniard system met conditions laid out by the Pentagon, DAPA said.

"The successful FCT test recognized the excellence of our home-made weapons system and provided an opportunity to confirm the possibility of exporting Bigung to the global market, including the U.S.," DAPA head Wang Jung-hong said, adding Bigung has preemptively secured key technologies before system development.

The Poniard is a 70mm (2.75-inch) low-cost guided imaging rocket (LOGIR) with a flying range of about eight kilometers and is equipped with guided control devices. It is a standalone weapon system with one shot one kill and fire-and-forget capability. Once the rocket is launched, no designation of the target is needed as it flies automatically towards its target.

LIG Nex1, a defense company, was involved in the development of the Poniard. Hydra 70 rockets were reconfigured to add an infrared guidance system. Each rocket is 1.9 m long. A military truck carries 36 rockets in two separate launchers and a mast-mounted target acquisition system capable of detecting targets and transmitting thermal images to the rocket.

Originally, the Poniard was to be developed in a joint project with a U.S. naval research body, but the American partner withdrew due to a budget shortfall, prompting South Korea to develop an inexpensive and easy-to-use domestic system that would effectively counter the threat of fast-moving sea targets.

In 2017, the first Poniard unit was deployed to a front-line island near a western maritime border to counter swarm attacks by North Korean boats which have frequently intruded into South Korean waters, triggering a series of naval clashes.

The two Koreas recognize different boundaries dividing their territorial waters in the Yellow Sea. Because the 1950-53 Korean conflict ended with a ceasefire rather than a treaty, the two Koreas remain technically at war. The maritime border has always been a flashpoint. In November 2010, North Korea shelled a front-line island, killing four South Koreans and briefly triggering concerns of a full-scale conflict.