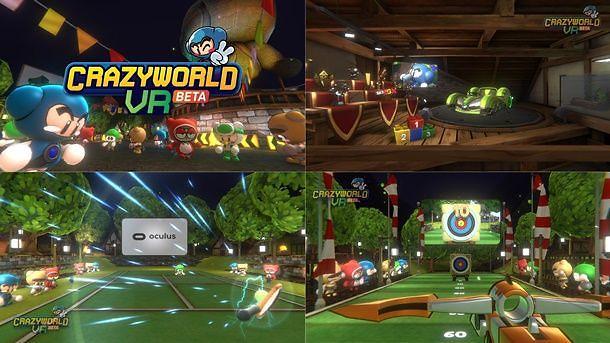 
SEOUL -- "Crazyworld VR," a mobile virtual reality game developed by South Korea's major game publisher Nexon, will be released soon under a joint marketing agreement with SK Telecom. Unlike other VR games that consist of single-play content, the new game features up to 50 people interacting in a single space in real time.

SK Telecom (SKT) and Nexon forged an intellectual property deal in February 2019 to recreate Nexson's three iconic games -- Kartrider, Bubble Fighter and Crazy Arcade -- into VR games supported by 5G networks. Users can hardly feel motion sickness, which has been pointed out as a disadvantage of VR games.

Nexon said on Monday that it has signed a memorandum of understanding with SKT to jointly market Kartrider Rush+ and release Crazyworld VR. Kartrider Rush+ is based on Kartrider, a casual racing game which is still popular among teenagers.

SKT and Nexon would conduct joint marketing, discover new content in VR and cloud game areas and cooperate in e-sports, with SKT participating in the title sponsors of this year's Kartrider league season 1.

SKT, which seeks to diversify a lineup of game and other contents to maintain its competitive edge as a top mobile carrier in South Korea, has launched 5G AR and VR services, including Jump AR which is an AR service that teleports users to an eSports stadium through smartphone screens.

"With the advent of VR games and cloud games, the gaming sector is facing a new turning point," SKT's 5GX biz and service head Jeon Jin-soo said. "We expect challenges and achievements toward the global game market through technology and marketing cooperation."

The establishment of 5G networks in South Korea triggered a flurry of business cooperation in various industrial sectors while mobile carriers have tried to develop 5G edge cloud-based solutions for businesses and gaming.

Competition grows in the emerging cloud gaming market, based on the fast data connection that allows users to seamlessly play games from anywhere at any time with low latency. The idea of cloud gaming or remote gaming has been around for over a decade, but its development gained traction thanks to the introduction of 5G.