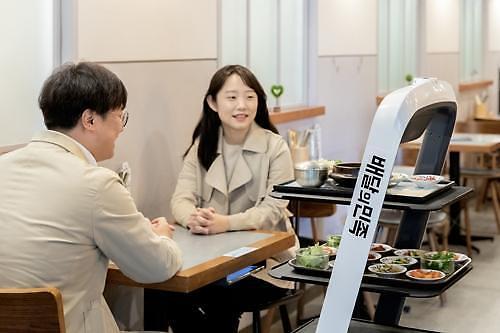 
SEOUL -- The operator of South Korea's most favorite delivery service app Baedal Minjok will deploy serving robots to some 50 restaurants free of charge in an effort to popularize waiter robots that are considered to be cost-saving and convenient.

Woowa Brothers said on Monday that it will support about 50 restaurants with Dilly capable of navigating around a restaurant carrying dishes and plates from kitchens to tables.

"I hope that serving robot Dilly will be of some help to troubled mall business owners," Woowa Brother's robot business department head Kim Yo-seob was quoted as saying. Initially, the company had planned to deploy robots to 10 restaurants but decided to increase the number due to high demands.

The waiter robot was first introduced through a rental program in November last year. Woowa revealed its plan in February this year to popularize its waiter robot service by deploying Dilly to up to 300 stores by the end of 2020.

Woowa tested a six-wheeled version of Dilly in November last year in the campus of Konkuk University in eastern Seoul. When students make orders using a delivery app, Dilly robots pick up food from nearby restaurants and deliver them to designated pickup spots. During its 25-day test run, Dilly made a total of 2,219 delivery runs and received positive feedback from users as well as researchers.

Woowa and Yogiyo, the country's second-largest delivery service, joined hands in December last year through the acquisition of shares to make an overseas foray into Southeast Asian countries. Delivery Hero, a Berlin-based online food delivery service that runs Yogiyo, agreed to acquire an 87 percent stake in Woowa. The two companies agreed to set up an equally owned joint venture in Singapore.