Voting proceeds in calm and orderly manner, no worries about infection 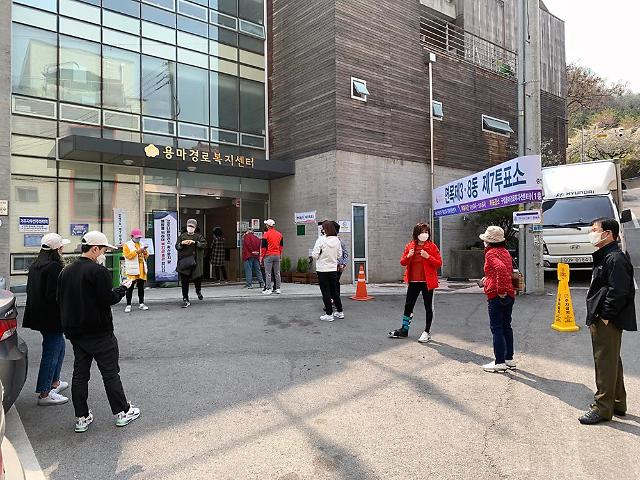 Voters wait outside a polling station in eastern Seoul on April 15. [Photograph by Park Sae-jin]

SEOUL -- It's like a silent march to the judge of fate, but there was no fear in their faces. Rather, many were relaxed and confident, showing a sense of pride and belief that the final moment to conquer an insurmountable epidemic is not far away.

The mood outside a polling station at an elderly culture and fitness center in Seoul's eastern district of Jungnang was calm and orderly. Tens of people wearing face masks, light jackets and windbreakers stood in a long line and kept a distance of up to two meters (6.5 feet) from each other, waiting silently for their turn to vote.

It took about five minutes until officials from the National Election Commission (NEC) guided voters one by one into the building. Only whispers between friends and family members filled the hallway of the fitness center as they moved in an orderly line. Voluntary workers walked around with a disinfectant spray to sterilize doorknobs and guardrails on stairs. 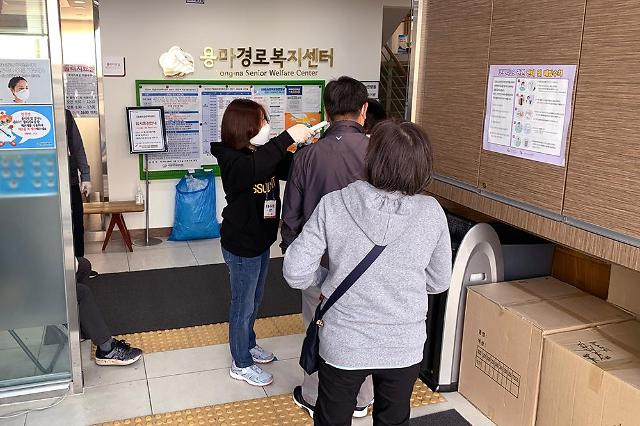 NEC officials were busy checking body temperatures, asking people not to take their masks off and handing out disposable vinyl gloves. "Use hand sanitizers first and put the gloves on," said one official. Inside the polling station, voters were guided into a booth after registration, supervised by ten officials.

The process of making a vote ends quickly when voters submit ballot papers into a box, and they were told to go home swiftly.

"I was not conscious about COVID-19. There's nothing different from previous elections except that people are wearing masks. I feel more assured of seeing officials spraying disinfectants," said Kim Hyun-joo, a 58-year-old housewife.

Turnout was higher than the previous elections four years ago, but NEC officials reported no serious disturbances at 14,330 polling stations nationwide. "Many people visited the center to vote regardless of their age groups. No one has made any complaints or expressed worries about COVID-19," Kim Jong-in, an NEC official in Jungnang, told Aju Business Daily.

Voters appear to feel safe inside polling stations which have been managed and disinfected well. "I am not even a bit worried. The NEC is well prepared. What would go wrong? It's not like we are staying in this place for a long time. I see no need for a fuss," said Ryu Beonm-ryong, a 70-year-old retired businessman.

South Korea is the first country to hold a major political event since a highly contagious coronavirus hit the global community this year. It would become a role model if voting turns out to be trouble-free.