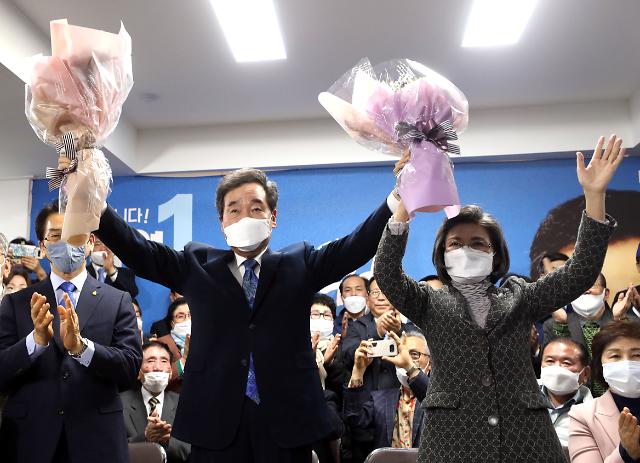 
SEOUL -- Former prime minister Lee Nak-yeon of the ruling Democratic Party firmed his position as a potential presidential candidate with a comfortable victory in a heavyweight election battle against Hwang Kyo-ahn, an outspoken opposition leader, in a district that has been regarded as a key constituency in South Korea's political map.

Hwang, who was also seen as a candidate for the 2020 presidential elections, resigned as chairman of the conservative United Future Party to take responsibility for the party's crushing defeat.

Jongno plays the symbolic role of the gladiator pit of heavyweight politicians. Three former presidents were elected in the Jongno District before running in presidential elections. Lee's victory put him on a solid track leading him to the presidency.

Lee was born in the southwestern seaside county of Yeonggwang in Jolla Province in 1952 as the oldest son of a poor farming family of seven children. After graduating from the Seoul National University's School of Law, he got a job at Dong-a Ilbo, a major newspaper based in Seoul, as a political journalist in 1979 instead of becoming a lawyer because his family could not financially support him.

It was his profession that led Lee to walk his political path. He had forged a close personal relationship with Kim Dae-jung, the late president who won a Nobel peace prize, during his time as a journalist. Kim, who was nicknamed the Nelson Mandela of South Korea, persuaded Lee to start his political career as an opposition politician in 1989, but Lee refused because he wanted to go to Tokyo as a correspondent.

Finally, Lee ventured into politics in 2000 based on his ties with Kim and was elected as a National Assembly member representing his hometown and served as spokesperson of Kim's party. In his early years as a politician, Lee became a close friend with Roh Moo-hyun, the late president (2003~ 2008). Lee stood by Roh when the National Assembly, led by opposition parties holding the majority, voted to impeach Roh for illegal electioneering in April 2004. The impeachment decision was overturned by the Constitutional Court.

Lee's advice to fellow politicians during confusing times became famous and moved people's hearts. "If you do not know the short cut, go by the big road. If you do not know where the big road is, just walk straight forward. If it's too hard for you, stop where you are standing and think."

After serving four terms in the National Assembly, Lee successfully ran for the governor of South Jeolla Province in 2014 and focused on the well-being of people living in a relatively underdeveloped region.

As provincial governor, Lee was famous among government workers for being meticulous and requesting his workmates to carry out projects flawlessly. At the same time, he gained popularity for being a non-authoritarian governor who often spent his time to drink Makgeolli, the traditional Korean rice beer, with government workers, neighbors and reporters after workhours. For his love of Makgeolli and socializing with people, he earned the nickname of "Makgeolli Governor".

In May 2017, Lee was picked by President Moon Jae-in as prime minister. He had set a record as the country's longest-serving prime minister since South Korea adopted direct presidential elections in 1987. Lee returned to politics after he finished his term in office in January this year.

During his campaigning for parliament elections, Lee proved that he was loved by people regardless of their political orientation. Many praised his attitude of listening to people's voices and providing answers that consist of carefully selected words.