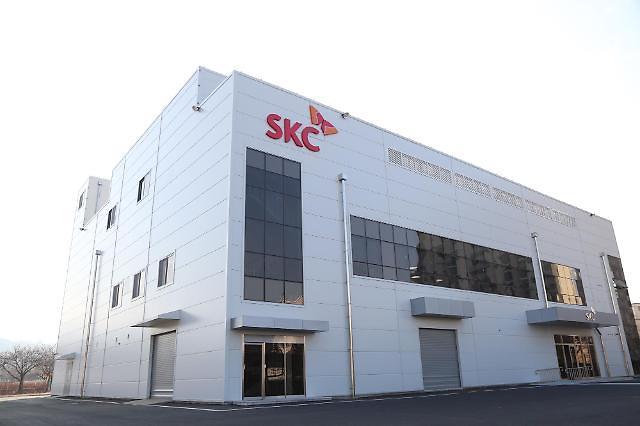 SEOUL -- SKC, a leading polyester film and chemical material manufacturer in South Korea, is ready for the mass production of high-end mask blanks, a key material in the production of semiconductor chips, to reduce its heavy dependence on Japanese products. Commercial production is possible in the second half of this year.

The Ministry of Trade, Industry and Energy launched a field inspection of localization on Monday at SKC's high-end mask blank plant in the central city of Cheonan. Construction of the plant was completed in December last year as part of a strong government initiative to reduce South Korea's reliance on Japanese materials.

Mask blanks and photomasks are essential in the production of semiconductor chips. They are the master plates used to transfer the minute, highly complex circuit patterns for semiconductors onto the wafers that become IC chips. The mask blank is a substrate for photomasks, an opaque glass plate with holes or transparencies that allow light to shine through in a defined pattern.

"If blank masks, a key material in the semiconductor process, are mass-produced, domestic supply stability will improve," the ministry said in a statement, pledging full support for the stable supply of 100 core items.

SKC is a unit of South Kora's SK Group, which has stepped up its pre-emptive investment in semiconductor materials since Japan strengthened regulations in July last year on exports of key materials for semiconductors and displays. South Korea has tried hard to diversify supply lines or localize key materials from Japan.

"Close cooperation between the government and companies ... is important for certain changes such as strengthening the technical skills of material, parts and equipment and establishing a healthy industrial ecosystem," Vice Minister Cheong Seung-il was quoted as saying.