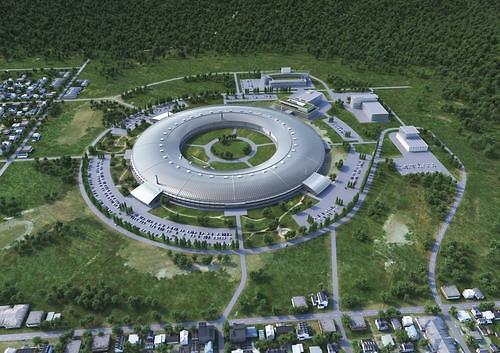 A perspective image view of a new synchrotron radiation accelerator to be built by South Korea.[Yonhap News Photo]


SEOUL -- Two cities were left as final candidates in a race to grab South Korea's state order for the construction of a new synchrotron radiation accelerator, which is seen as an ideal tool for many types of research. The winner will be selected on May 8 after an on-site inspection by evaluators.

Out of four cities that have made bids, Naju, some 290 kilometers (180 miles) southwest of Seoul, and Cheongju, 110 km south of Seoul, have eliminated Chuncheon and Pohang to reach the final round. The Ministry of Science and ICT said that after a feasibility study, construction would begin in 2022 for completion in 2028.

Synchrotron radiation is the electromagnetic radiation emitted when charged particles are accelerated radially. When high-energy particles are in acceleration, including electrons forced to travel in a curved path by a magnetic field, synchrotron radiation is produced. As the new accelerator emits brighter X-ray lasers than before, researchers can develop medicine to treat specific diseases without damaging healthy tissue and analyze the structure of atomic-scale objects more easily.

Provincial governments have been eager to win the state project because it is expected to have a high economic effect on their regional economy. The construction cost alone is estimated at almost one trillion won ($814 million).

Along with its proximity to an industrial and academic cluster in Gwangju, the capital of South Jeolla Province, Naju has highlighted its geologic strength, insisting the proposed site is located on a very stable and flat granite bedrock that could help reduce construction costs.

"We have poured all our resources and capabilities to attract the radiation accelerator and will wait for a fair evaluation," South Jeolla Province Governor Kim Yung-rok said, stressing the importance of balanced national development.

Cheongju in North Chungcheong Province thinks it is in a better position than Naju, citing a nearby research belt with abundant human resources. The city is not far away from Daejeon, located in the central region of South Korea, which has many state bodies, research institutes and colleges.

South Korean runs two synchrotron radiation facilities in the lab of the Pohang University of Science and Technology (POSTECH), which succeeded in emitting high-intensity laser in 2017. There are other types of accelerators. A proton accelerator is located in Gyeongju. A heavy-ion accelerator will be built in Daejon and a heavy particle accelerator in Busan.