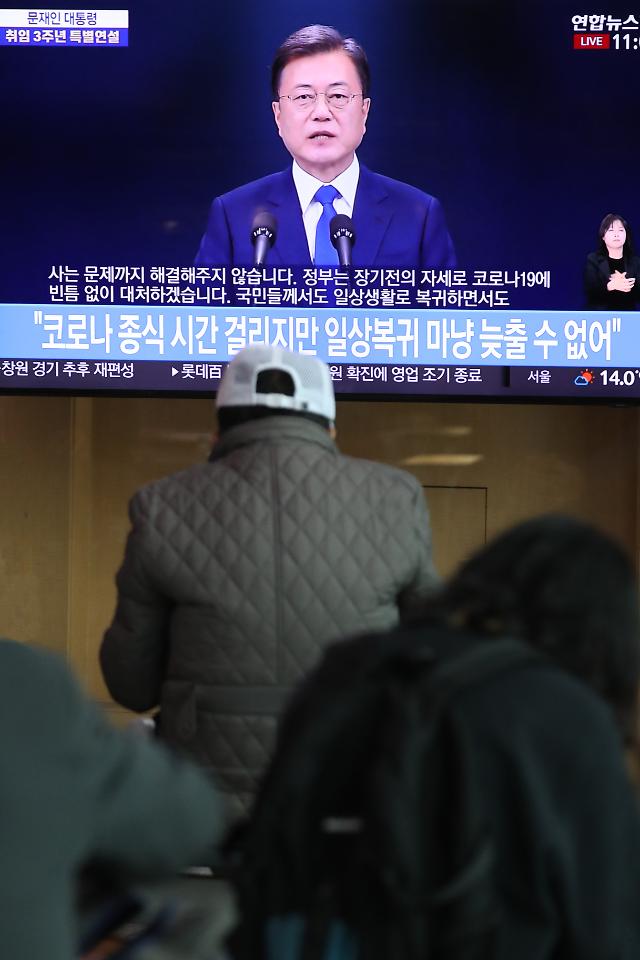 Citizens watch President Moon Jae-in making a televised address at the lobby of a railway station in Seoul on May 10.[Yonhap News Photo]

SEOUL -- President Moon Jae-in presented a new national goal to establish his country as a leader in the process of reorganizing the post-pandemic global order, saying that South Korea has a golden opportunity to become a world factory of high-tech industries and change the global industrial map.

As South Korea has become the safest and most transparent production base in the world, it now has a "golden" opportunity to push ahead with bold strategies to attract high-tech industries and investments from overseas, Moon said Sunday in a televised address marking the third anniversary of his inauguration.

"The Republic of Korea will become a 'world factory of high-tech industries,' thereby changing the global industrial map," the president said, suggesting South Korea should take the current crisis as a driving force for new opportunities and development.

Based on its excellent infrastructure and competitive edge in Information and communications technology, South Korea should "blaze a trail" in the post-COVID-19 era with a pace-setting economy, Moon said. "Our goal is 'a Republic of Korea that takes the lead in the world.'"

South Korea's national status is higher than ever with its COVID-19 response becoming a global standard, Moon said, vowing to do his best to turn crises into opportunities for the remainder of his five-year term that began in 2017 following a turbulent political period that sent his predecessor being impeached and landing into jail.

"We have ample capabilities to lead the digital economy by combining Fourth Industrial Revolution technologies such as artificial intelligence and big data," Moon said, citing South Korea's competitiveness and potential in the bio industry as well as strengths in epidemic prevention, non-face-to-face medical services and online education and transactions.

Describing the Korean version of the New Deal as a preemptive investment for the future, designed to establish digital infrastructure, Moon said non-face-to-face industries related to medical services, education and retail distribution will be intensively fostered.

"We are now standing at the center of rapid global changes. An invisible virus is transforming the world in its entirety. It is fundamentally changing our daily lives and pushing the world economy into an unprecedented crisis. It is also bringing about enormous changes not only in the socio-economic structures of nations but also in the international order," Moon said.

However, prospects for the post-pandemic global economic order is not rosy, Moon said. "The reality is grave, indeed. Nationalism driven by the pursuit of one country’s own survival may expand further. If we fail to turn this crisis into an opportunity, we cannot survive. It’s a desperate time; we must prepare for the future in a preemptive manner."

South Korea is ready to lead international cooperation in the post-COVID-19 era while placing "human security" at the center that deals with all factors threatening safety such as disasters, diseases and environmental issues.