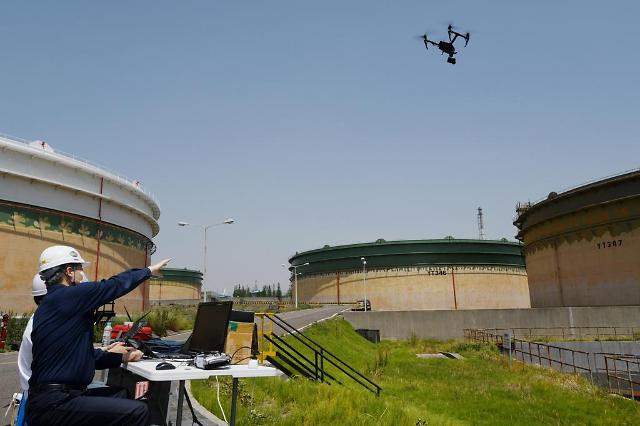 SEOUL -- SK Energy, a top oil company in South Korea, has adopted a smart drone surveillance system to monitor safety hazards such as cracks on the exterior of sports dome-sized oil reservoirs instead of human inspectors who have to climb gigantic structures.

Oil companies that have huge oil storage facilities are required to carry out safety inspections every five or six years to see if oil tanks are safe from structural degradation or damage. It normally costs 900 million won ($733,777) at an oil storage plant with about 30 oil reservoirs.

SK Energy said in a statement on Wednesday that it adopted a smart drone surveillance system to inspect its oil storage facility in the southeastern port city of Ulsan. The facility capable of storing 20 million barrels has 34 reservoirs that are about the size of a small stadium, 86 meters (282 feet) high.

"Previously, drones could not be used for safety inspection because of the characteristics of oil reservoirs that are very sensitive even to a small impact," SK Energy said, adding that the operation of drones with minimized risks of accidents underlines a project to establish the smart and safe management of tanks.

With drones, SK Energy can reduce the cost of inspecting tanks to 50 million won from 900 million won.

Although the operation of commercial drones is strongly restricted in South Korea due to flight regulations, a variety of drones monitor air pollutants, wildlife and traffic on highways. Some drones are used by rescuers to find missing people lost in the woods or out in the sea.