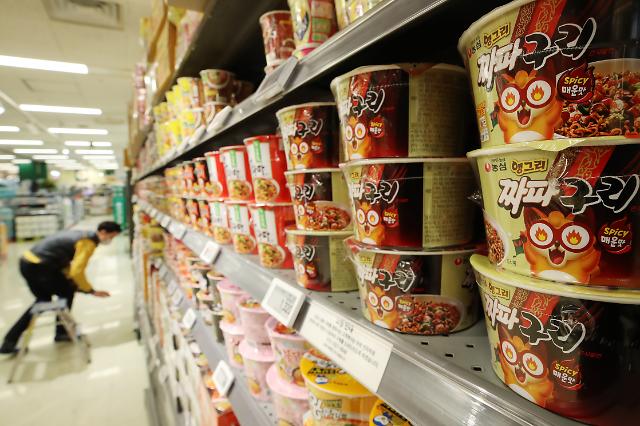 SEOUL -- Helped by strong demands at home and abroad, South Korean instant noodles known as Ramyeon are enjoying a heyday that began in February when COVID-19 made a full-fledged attack, leading to lockdowns and social distancing in many countries. Among other ready-to-eat meals, ramyeon has been regarded as a civilian combat ration in South Korea.

Samyang Foods, a major ramyeon producer which introduced instant noodles for the first time in South Korea in 1963, said its consolidated operating profit in the first quarter of this year hit a record high of 26.6 billion won ($21.6 million), up 73 percent from a year ago. First-quarter sales rose 29 percent on-year to 156.3 billion won.

The company attributed brisk sales to COVID-19 that boosted demands for ramyeon in South Korean and other countries. In the first quarter, overseas sales were up 49 percent on-year to 77.3 billion won and domestic sales rose 15 percent to 79 billion won. Orders started spiking in late February because consumers spend more time at home.

Exports of South Korean ramyeon stood at $467 million in 2019, up 13.1 percent from a year ago. Samyang's Halal-certified noodles famous for its infernal spiciness hit the shelves in Southeast Asian countries in 2017, creating an online phenomenon, with consumers uploading their agonizing journey of eating hot noodles onto YouTube.