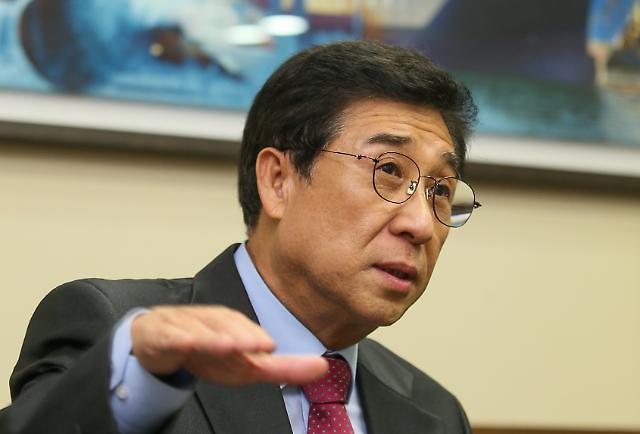 SEOUL -- A coronavirus pandemic sent the global shipping industry into a deep recession, but HMM, a major creditor-controlled shipping company in South Korea, voiced guarded optimism about a business recovery, citing its new membership in one of the world's largest shipping alliances.

HMM, formerly known as Hyundai Merchant Marine, joined The Alliance grouping Hapag-Lloyd of Germany, OEN of Japan and Yangming of Taiwan this year after it withdrew from 2M, the world's largest shipping alliance.

"We can secure a stable volume of cargo through the maritime alliance while laying the groundwork for the normalization of management through new ships with low-cost and high-efficiency structure," HMM CEO Bae Jae-hoon said in an interview with Aju Business Daily.

"A super-large ship capable of price competitiveness has enabled us to join The Alliance," Bae said, referring to the delivery of Algeciras, a giant container ship capable of carrying 23,964 containers, in April. HMM has signed contracts with three top shipbuilders in South Korea to acquire 20 container ships as part of a government scheme to rehabilitate the domestic shipbuilding industry.

Eight 16,000 TEU container ships will be delivered by Hyundai Heavy Industries, seven 23,964 TEU ships by Daewoo Shipbuilding & Marine Engineering and five 23,820 TEU ships by Samsung Heavy Industries. TEU is an inexact unit of cargo capacity often used to describe the capacity of container ships. It is based on the volume of a 20-foot-long (6.1 m) intermodal container, a standard-sized metal box that can be easily transferred between different modes of transportation.

"The deployment of super-large ships will save 15 percent of sailing expenses on European routes," Bae said, adding the introduction of giant container ships would reduce the burden as more ships can be rented within the shipping alliance.

HMM withdrew from 2M because the shipping company could not put its ships into service as it had to purchase hold spaces from the two regular members to transport cargo to Europe. Now, HMM can use all routes and port networks run by ships of The Alliance on an equal footing. HMM will significantly increase its fleet on the European route.

COVID-19 has drastically reduced global cargo volume, but HMM will not change its drive to increase the size of its fleet. "It is a management crisis situation in which supplies from China fell 40 percent in the first quarter, but we are preparing for the post-corona era through a subdivided scenario," Bae said.

"In the future, it is simply unpredictable, but we expect a rebound in the form of a (Nike) swoosh curve as the most likely scenario," Bae said. A V-shape in which the economic rebound is as swift as the slump was the favored trajectory early on, but now more economists worry about a U-shape.

In the first quarter of this year, HMM posted an operating loss of two billion won ($1.6 million), compared to a loss of 105.7 billion won a year ago. Sales fell 0.2 percent on-year to 1.31 trillion won. "The first quarter suffered from a drop in volume due to COVID-19, but it was a good defense as we secured supplies from South Korea and Southeast Asia," Bae said, predicting there will be no major shock in the second quarter.

HMM will provide services that can solve customers' grievances and target niche markets through "human touch beyond automation and systemization," Bae said. The shipping company signed a strategic partnership with Kakao Enterprise and established a long-term strategy based on artificial intelligence and big data technology.

"We are focusing on improving the quality of in-house data sharing in order to immediately cope with unforeseen situations," Bae said. "We are increasing productivity so that we can activate big data with artificial intelligence and people can grow it to complete customer-friendly DNA." For its diversified portfolio, Bae promised to look for a new genre other than shipping