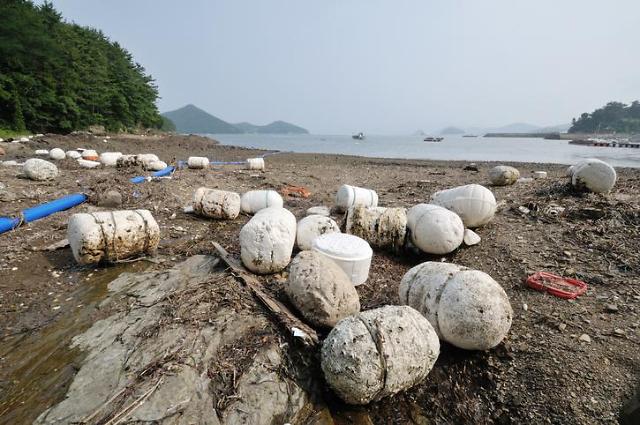 SEOUL -- As part of a campaign to reduce plastic pollution in the ocean, styrofoam buoys used widely for aquaculture in South Korea will be replaced with eco-friendly or biodegradable ones by 2025 as foamed polystyrene pollution raised significant concerns relating to environmental and human health.

There is growing concern over plastic debris and their fragments as a carrier for hazardous substances in the marine ecosystem. Foamed polystyrene is often used in aquafarming, but polystyrene (styrofoam) buoys can be quickly blitzed into tiny puffed pieces by waves, wind and animals.

Out of some 55 million buoys used for the farming of fish, algae and aquatic plants in South Korea, 75 percent of them are styrofoam buoys as of 2019, the Ministry of Oceans and Fisheries said, adding that styrofoam buoys account for 55 percent of all offshore marine plastic waste.

Eco-friendly buoys developed earlier have failed to satisfy fish farm operators because they were expensive and can sink when water is absorbed. For a fundamental solution, the ministry has organized forums involving fish farm operators, environmental experts and civic groups. As a result, new eco-friendly buoys were developed and went through performance testing for four months at actual fish farms from November last year.

New buoys will be supplied to fish farms starting from the second half of this year, the ministry said, adding that it would push for a long-term government project to develop new materials that can completely replace plastic buoys. To collect waste styrofoam buoys, storage yards will be set up at 400 ports by 2030.

"Our plan this time has already been effective in that fish farmers have been the main players in improving the marine environment," Lee Soo-ho, a ministry official in charge of aquafarming, said in a statement. "We will spare no effort to support the complete disappearance of styrofoam buoys from our fish farms in 2025."