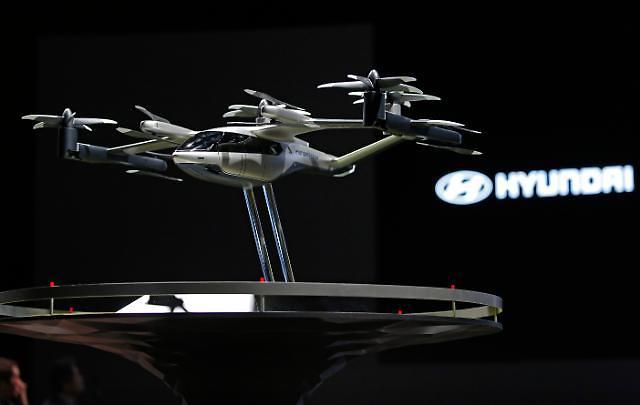 A model of Hyundai's urban air taxi concept is being displayed at CES 2020. [AP / Yonhap Photo]

SEOUL -- South Korea will enact a special law to achieve the commercialization of urban air mobility ahead of other countries. Finance Minister Hong Nam-ki said early commercialization will help South Korean companies gain the upper hand in competition with global companies and secure leadership in the initial market.

Urban air mobility (UAM) is an ecosystem covering personal air vehicles (PAVs) and infrastructure such as a new navigation system, take-off and landing fields and charging technologies. PAVs or flying cars are emerging as a future system of travel to avoid traffic jams on urban roads as the doorstep-to-doorstep average speed for cars is predicted to degrade further.

"Urban air mobility such as cargo and passenger transport drones is an innovative transportation service and a new growth industry in the future that is expected to reach 730 trillion won ($599 billion) by 2040," Hong said in an economic strategy conference. "If we first commercialize it amid intensifying competition from global companies such as Uber, we will be able to secure leadership in the initial market."

A road map unveiled at the conference called for the commercialization of drone taxis in 2025 and autonomous flights in 2035. Pilots will board flying vehicles for about 10 years after the first stage of commercialization. The government plans to prepare operating standards by 2024 and complete the development of a one-seat vehicle by 2023.

"Although the development of technologies related to UAM is slower than that of advanced countries, South Korea is the fastest country to establish a government-level road map for institutional and policy support," said Kim Sang-do, a policymaker in the Ministry of Land, Infrastructure and Transport. "If we faithfully implement the road map, we will be able to go ahead of advanced countries."

Hong said the government would design transportation licenses, an insurance system and a profit distribution system for South Korea's K-UAM infrastructure that would allow the private sector to push for technology development and commercialization. "To expedite this strategy, we will push for the enactment of a special UAM law," he said, adding cargo transportation will be provided first in consideration of safety.

Startups as well as global giants such as Airbus, Boeing and Uber are vying to develop PAVs and autonomous air taxis. Hanwha Systems, a provider of defense products and technologies in South Korea, has invested in K4 Aeronautics, a U.S. personal air vehicle developer, to participate in the development of PAVs.

The Hyundai auto group has revealed plans to become the mobility service company. Executive vice chairman Chung Eui-sun, the group's virtual head, called for a drastic structural change to become a key player in the production of PAVs. Through collaboration with Uber, Hyundai unveiled its first electric air vehicle concept, S-A1, at a trade fair in Las Vegas.

"Urban air traffic, which we've only seen in movies, is at hand thanks to technological advancement. We will push for the enactment of the UAM special act by 2023 and lead the global market by laying the institutional foundation for industrial development," said Transport Minister Kim Hyun-mee.