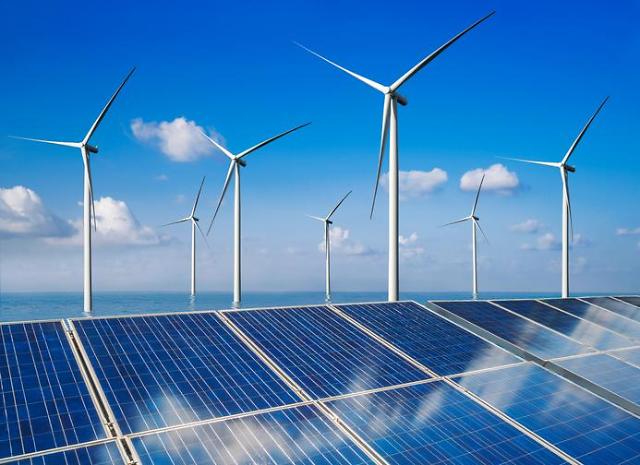 SEOUL -- Fishermen are still disgruntled, but South Korea's government-sponsored project to build a major floating wind farm with a capacity of 1.0 GW by 2025 has built up its force by attracting 19 domestic and foreign partners who agreed to develop internationally applicable technologies through joint research and information exchanges.

A business agreement involving 19 sate enterprises, research bodies and private companies was signed in the southeastern industrial port city of Ulsan in a ceremony led by Ulsan City Mayor Song Cheol-ho, who has actively pushed for the floating wind farm project in line with a government campaign to step up the use of wind, solar and other types of renewable energy.

It is designed to establish a cooperative system for the construction of a floating wind farm with a capacity of 1.0 GW by 2025. Ulsan will provide administrative support for the successful development and demonstration of technologies while other participants will strive to develop internationally applicable technology through mutual cooperation and information exchanges.

"As floating offshore wind power is in the early stages of commercialization around the world, it is urgent to expand business through market preoccupation at an early date," Song said. "We hope that the cooperation of professional companies and institutions will help South Korea lead the global offshore wind power market."

The project dates back to October 2018, when KNOC installed a laser-based wind energy meter at its offshore gas platform, which is to retire in June 2021, to see if it could be converted into a floating wind power turbine. Song has called for good communication with local fishermen, citing their concerns about the construction of wind farms.

Commercial floating wind turbines are at the early phase of development. An operational floating wind farm commissioned in October 2017 off the coast of Scotland has five turbines with a total capacity of 30 MW. Compared to fixed offshore wind farms which are generally installed in shallow waters, floating wind turbines located in deep waters can reduce visual pollution, provide better accommodation for fishing and shipping lanes, and reach stronger and more consistent winds.

Fishermen insisted that offshore wind farms would curtail their operating radius and damage marine habitats. They believe electromagnetic fields generated from high-voltage submarine cables could obstruct the spawning and migration of fish stocks.

Ulsan has conducted an environmental effects evaluation. Studies showed that magnetic fields could affect some species, but there is at present limited evidence that electromagnetic fields generated by offshore windmills affect marine habitats.

South Korea, which is entirely dependent on imported oil, has promised to inject about $100 billion into renewable energy by 2030 to support President Moon Jae-in's campaign aimed at reducing the use of fossil and nuclear energy. About 60 percent of the state fund would be spent on installing solar panels.

Some research bodies in South Korea have raised concerns about technology subordination and high costs. However, the Seoul government is ready to push ahead with the localization of technologies related to floating offshore wind farms by 2025. The Ministry of Trade, Industry Energy presented a road map on June 8 to produce 16.5GW of electricity from wind farms by 2030.