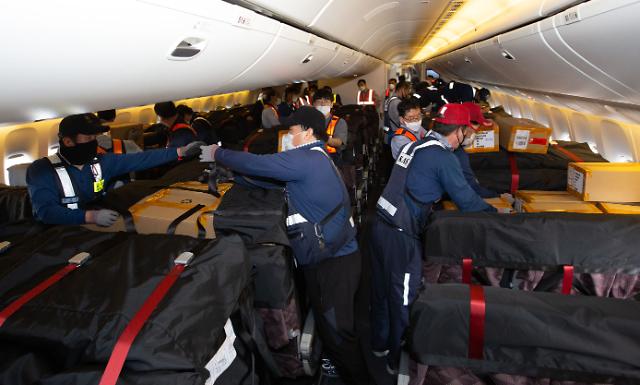 SEOUL -- In a solution to ride out an unprecedented liquidity crisis caused by a coronavirus pandemic, Korean Air, the top flag carrier in South Korea, was allowed to use cargo seat bags in passenger aircraft cabins.

Due to a COVID-19 pandemic, an increasing number of airlines are now using their passenger aircraft for cargo flights. Some airlines have even removed seats to convert their passenger cabins into cargo holds.

In South Korea, carrying cargo other than passenger-cargo compartments and overhead stowage bins has been banned for safety reasons, but at the request of airlines, the Ministry of Land, Infrastructure and Transport gave temporary approval to in-flight cargo transportation on condition of seat fixings and special packaging.

Passenger flights, which account for about 50 percent of air freight, have seen a drastic decrease in recent months, but the demand for the emergency transportation of medicines and medical equipment has increased.

International passenger traffic at Incheon International Airport, the main gateway of South Korea, fell 97.6 percent on-year to 138,000 in May. However, Korean Air's international cargo traffic rose nine percent in May.