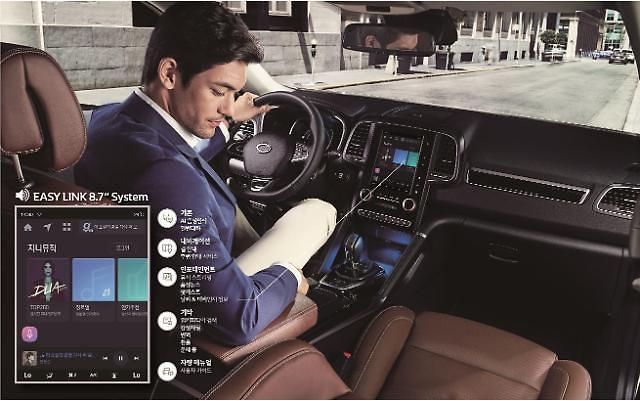 
SEOUL -- KT, a leading telecom company in South Korea, will provide a next-generation artificial intelligence-based infotainment system to Renault Samsung, the South Korean unit of French carmaker Renault, as part of a deal forged between the two companies last year.  without connecting smartphones.

The infotainment system is an integrated platform that uses a car's information display and allows drivers to control audio, entertainment, air conditioning and safety features. The system offers other features such as navigation and entertainment. For infotainment and other functions, some premium vehicles have a wide display stretching over the dashboard.

Many infotainment systems are connected via mobile communication to receive on-road information or automatically contact emergency services when the car detects abnormal activities such as a car crash or parts malfunction.

KT said in a statement on Thursday that "AI Auto Assistant," the new artificial intelligence (AI)-based infotainment system for Renault Samsung's new models later this year, will allow drivers to use real-time online streaming music services, navigation and other services such as air quality and weather information.

"We will expand our connected car service area to Asia and take the lead as a global platform operator in the fast-growing connected car industry," KT's connected car business head Choi Kang-rim was quoted as saying.

Other infotainment systems offer similar services but drivers should connect their phones to the system of cars to use features such as real-time navigation and online music streaming.

KT's system will offer a tailored connected AI service that recognizes the driver's voice. AI can provide destinations based on daily schedule as well as route information to the nearest gas station if the fuel level is low. It can also detect malfunctions and tell the driver to visit a maintenance shop.