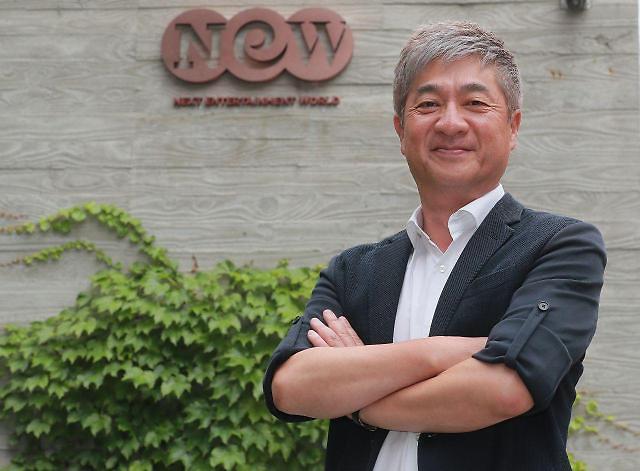 
SEOUL -- A coronavirus pandemic has brought up epochal changes in the pattern of consumption, moving up the era of consuming content on a variety of devices anytime and anywhere. The media market is no exception as more people use digital and virtual reality platforms to interact online with others.

"The travel industry is changing to indirect experience rather than direct experience. The same goes for content. Korean content should go further to the substantial global market. It will be more important to promote K-content abroad than domestic competition," said Kim Woo-taek, who founded Next Entertainment World (NEW), an entertainment and media distribution company based in Seoul.

NEW, which has distributed films since its founding in September 2008, suffered a crippling setback this year as the pandemic sent many people staying in their homes. Social distancing, an act of not engaging in social activities or not visiting populated places, has settled as a social trend. Content services have gained popularity as many people abandoned outdoor activities.

"Before COVID-19, traditional media platforms such as TVs, theaters and concert halls have been challenged by digital platforms," Kim said in an interview with Aju Business Daily. "Personally, I felt that the changes in the last two years were much greater than the changes in 10 years since I started NEW."

Inevitably, media platforms are under pressure to change their business strategy. "The era of consuming content on a variety of devices anytime, anywhere has opened. Time and place restrictions have been removed from content consumption, and it has become common for all users, regardless of age, gender, or region, to consume content and customized advertisements according to their tastes," Kim said.

The pandemic is accelerating changes in the media market, with people enjoying media services at home, Kim said, adding Netflix, the world's largest the world's top over-the-top (OTT) service provider, was reborn as "a true media dinosaur" due to the coronavirus pandemic.

"Those who miss offline exchanges unique to theaters and concert halls are paying keen attention to Zoom and virtual reality platforms to interact online with others," Kim said, referring Zoom Video Communications, an American company that provides video telephony and online chat services through a cloud-based peer-to-peer software platform and is used for teleconferencing, telecommuting, distance education and social relations.

To cope with a rapidly changing business environment, NEW has established its visual effects (VFX) subsidiary called eNgin to maximize the efficiency of content production and the value of pre-production. NEW ID establishes a global digital content distribution and media strategy.

"COVID-19 has taken a toll on all industries, and NEW, which produces and distributes films, is no exception. I think the normalization of the film industry depends on how fast the emotional pandemic will recover," Kim said, vowing to make new preparations for the next decade.

The company will release its new film, "Peninsula," a sequel to the 2016 zombie action horror film "Train to Busan" that garnered unexpected popularity at home for its horrific depiction of zombie-infested Seoul and people going to the southern port city of Busan in a desperate attempt to take refuge.

The zombie horror film will be released in the format of both IMAX and normal cinema on July 15. IMAX films are screened at special theaters with wider screens.

NEW will go beyond just opening films at theaters and implement a more granular content distribution strategy, Kim said as he plans to distribute content through theaters as well as internet protocol television, subscription video on demand (SVOD) and advertising video on demand (AVOD). "To be successful, we also need to rework content that meets global standards."

OTT is a subset of video on demand (VOD). AVOD allows companies that advertise on broadcast and cable channels to reach people who watch shows using VOD. Consumers watch content without paying subscription fees. SVOD allows users to consume as much content as they desire at a flat rate per month. Transactional video on demand (TVOD) allows consumers to purchase content on a pay-per-view basis.

"For content to be successful, we need to collect and analyze user data," Kim said, calling for teamwork with other companies to create a true K-content channel.

(This story was based on an interview by Aju Business reporter Kang Il-yong.)