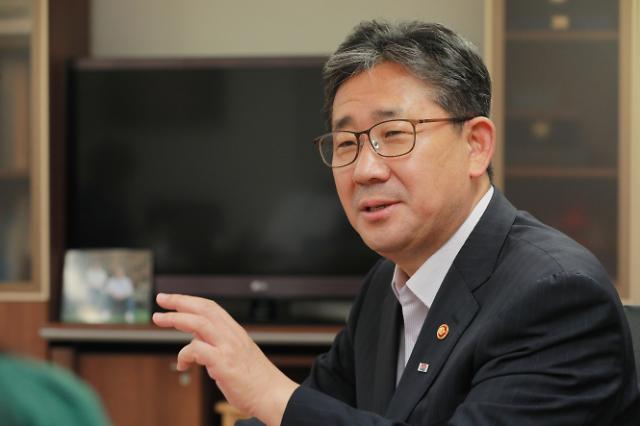 SEOUL -- As offline performances remained suspended due to a prolonged coronavirus pandemic, South Korea recommends a new cultural model that can strategically cope with the era of non-contact by nurturing sectors including online concerts, OTT video-on-demand services and e-sports.

"We must counteract against the spread of the non-contact and online trend. The key point of this movement is 'diverse top-quality content'. South Korea has the advantage of outstanding technology and manpower in the fields of performance, cinematography, games and realistic content," Culture, Sports and Tourism Minister Park Yang-woo said in an interview with Aju Business Daily.

The minister said such preparedness for the future would accelerate the global distribution of the new Hallyu (Korean cultural wave), allowing South Korea to turn the crisis into an opportunity. However, Park emphasized the importance of supporting and revitalizing activities in culture, sports and tourism, saying the government would roll out plans to provide direct support. Park took the role of chairing a cooperative committee to promote Hallyu.

The focus of the new Hallyu is on the convergence of new culture and traditional arts, Park said. As an example, Suga, a member of K-pop sensation BTS, mesmerized the world with "Daechwita" that showed an exciting mix of traditional Korean music. He reinterpreted Daechwita, a traditional Korean military parade music played by wind and percussion instruments, into a modern hip-hop song with the vibe and beats played by the palace royal guards of the Joseon Dynasty for centuries.

"Hallyu utilizing tradition has become very important," Park said. "We should diversity the genre of Hallyu through classical music, traditional dance and our art."

After the successful May release of Daechwita watched more than 97 million times on YouTube, BTS held an online-only concert on June 14 to attract about 750,000 fans across the world. It was the world's first mega-successful case of online performance in which fans shared emotions and ideas through online communities for weeks afterward.

"We think about ways which can connect people to form a warm community using non-contact methods. I think such methods are the cultural new deal," Park said, calling for the creation of content more realistic than those actually seen at concert halls in line with the changing trend of performances in the non-contact era.

To support domestic cultural sectors, Park's office has designated a 19-day period starting July 1 as a special tourism season. "Now is the time for travel and what's most important is traveling safely," Park said, demanding a new tourism culture supported by both business operators and tourists to prevent the spread of COVID-19 while traveling.

The culture ministry plans to create jobs for 6,400 quarantine workers at tourist hot spots to prevent the overcrowding of tourists and ensure people will follow quarantine rules such as keeping their masks on at all times. "We will actively explore and recommend alternative destinations for COVID-19," Park said.

South Korea would create exemplary cases of safe travel by discovering tourist sites that can comply with quarantine rules, such as hidden tourist attractions, quiet outdoor tourist attractions, walking paths, bicycle trips, and automobile travel routes, along with the establishment of a travel forecast system based on big data.

The travel period is a sign of boosting domestic demand in the tourism sector, Park said, describing it as an opportunity for people to return to their daily lives and revitalize the depressed tourism industry. "Through public-private partnerships, we will try to establish a safe travel culture for both local visitors and local tourism workers."

"Now, the pent-up demand for culture, sports and tourism is slowly increasing," Park said, promising to push for various "direct support" measures to restore domestic demand at an early date. "However, we will keep a close eye on the situation of COVID-19 and proceed with it safely."

Turning to a dispute with Japan over Hashima Island, also known as Battleship Island, Park urged Japan to correctly record historical truths. In June, Japan unveiled an industrial heritage information center in Shinjuku, Tokyo. In the exhibition hall, data on modern Japanese industrial facilities were displayed, but there was no mention of Koreans forced to work at coal mines on Battleship Island during World War II.

The 6.3-hectare (16-acre) Island, about 15 kilometers (9 miles) from the Japanese city of Nagasaki, now features abandoned concrete buildings and the surrounding sea wall. It was approved as a UNESCO World Heritage site in July 2015. While Japan promotes the island as the icon of rapid industrialization, South Koreans describe it as a site of forced labor during Japan's colonial rule from 1910 until 1945.

"The most important thing is to record historical truths, as Japan promised to the international community and said at the UNESCO General Assembly. I think it's right to show that Korean laborers worked in harsh conditions against their will. That's what Japan should do," Park said.

UNESCO recommended Japan to present a complete story about the island, but Tokyo was reluctant to do so. Amid growing public awareness of what happened, civic groups and scholars in South Korea have stepped their campaign to unveil forgotten stories about tens of thousands of Koreans forced to work under deadly conditions.

"I will inform UNESCO's secretary-general and UNESCO members of Japan's unfair measures," Park said, promising to step up an international campaign through foreign media organizations that Japan was dishonest and failed to keep its promise with the international community. If Japan were to be a responsible country, a responsible government, it would have to accept this."

The dispute over Battleship Island comes on the heels of a prolonged diplomatic row between Seoul and Tokyo over "comfort women" sexually enslaved by Japan's imperial army. Under a 2015 deal, Japan agreed to donate one billion yen ($9 million) to a foundation dedicated to supporting comfort women. In return, Tokyo urged Seoul to tear down the "comfort woman" statues erected by civic groups outside Japanese legations.

Historians estimate that up to 200,000 women mostly from Korea were forced to work in front-line brothels for Japanese troops. Many South Koreans still harbor deep resentment against Japan over its colonial rule, and they want Tokyo's sincere apology.