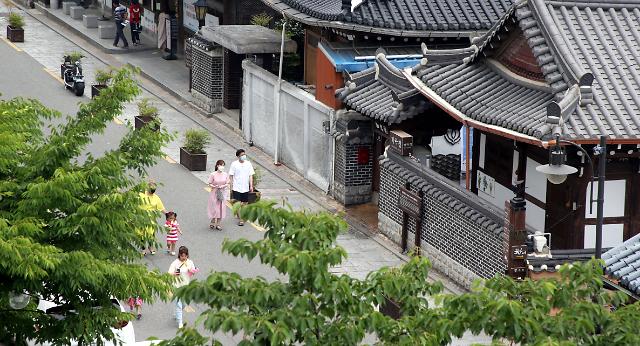 SEOUL -- Tourists who travel in a village full of centuries-old roof-tiled houses in the southern city of Jeonju can experience top-notch technology using a smart mobile blockchain-based payment system that was demonstrated for the first time by a local government in South Korea.

Blockchain is a decentralized digital ledger service. Every user carries a virtual ledger that synchronizes each time a change is made. Because of its characteristics, blockchain is virtually unhackable. The two-month demonstration of a smart blockchain payment system was demonstrated in Jeonju, some 200 kilometers (124 miles) south of Seoul.

Travelers can use the smart payment service at famous tourist spots including Hanok Village and Nambu marketplace. The demonstration aims to prove the technological capability of the blockchain-based payment system while providing support for domestic software companies.

"We will evaluate the effectiveness of the country's first blockchain-based payment system and correct technical problems," a North Jeolla Provincial Government official was quoted as saying. Tourists can use a digital payment app that provides a secure online payment service as well as travel-related services including GPS-based travel information. Affiliated stores were provided with free PR and marketing services and were exempted from transaction fees.

South Korea has been a testbed for new information technologies such as blockchain and artificial intelligence. Commercialized blockchain networks have been launched by companies such as Kakao, a major web service provider, and KT, the country's largest telecom company.

The city was regarded as the spiritual capital of the Joseon Dynasty because its royal family originated there. In 2012, it was chosen as a Creative Cities for Gastronomy as part of UNESCO's Creative Cities Network in recognition of the city's traditional home cooking handed down through generations, its active food research, and the hosting of distinctive food festivals.