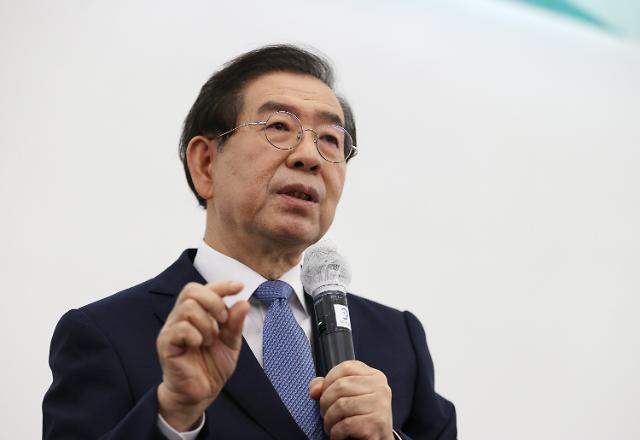 
SEOUL -- Seoul, the South Korean capital with a population of 9.74 million, proposed a ban on the new registration of any internal combustion engine vehicles from 2035 under the so-called Green New Deal aimed at reducing greenhouse gases.

"Quantitative growth centered on efficiency is no longer valid," Seoul Mayor Park Won-soon said. "We will push ahead with the Seoul version of Green New Deal, a future strategy for the survival of ourselves, the earth, and humanity, to make a full-fledged transition to a post-carbon economy and society."

The Green New Deal, which will cost 2.6 trillion won ($2.1 billion) by 2022, aims to promote eco-friendly policies in five major areas: buildings, transportation, urban forests, renewable energy and resource circulation. "I don't think it will go smoothly," the mayor said, pointing to opposition by some residents.

Park called for a revised law that would allow only new electric and hydrogen cars to be registered and ban all internal combustion engine vehicles in a green transportation area in the center of Seoul from 2035. He suggested the ban could be extended throughout Seoul in 2050.

Some 68 percent of greenhouse gases in Seoul come from the building sector. Seoul will introduce the mandatory zero-energy building (ZEB) of private buildings in stages from 2023. ZEB is a building with zero net energy consumption, meaning the total amount of energy on an annual basis is equal to the amount of renewable energy created on the site.

A total greenhouse gas system will be test-run next year for city-run public buildings with a total floor area of 1,000 square meters or more. Seoul will expand the system to the private sector starting with energy-consuming businesses from 2022. The system sets the total amount of greenhouse gas emissions per building every year and gives incentives to buildings that reduced greenhouse gases.

Solar power facilities will be installed in all possible public facilities. Seoul will support the installation of building-integrated photovoltaics (BIPVs) that utilizes exterior walls, windows, and other parts of the building. BIPVs are used to replace conventional building materials in the roof, skylights, or facades. The term is sometimes used to refer to photovoltaics integrated into the building after construction is complete.