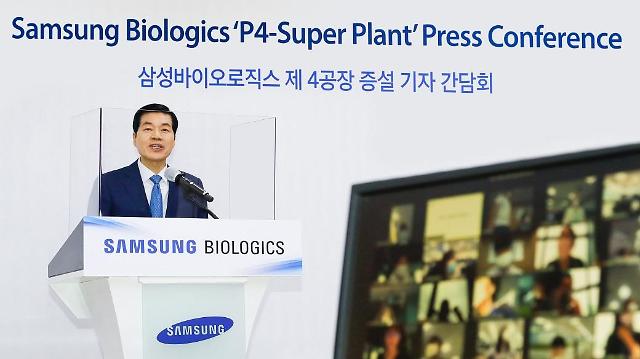 
SEOUL -- Helped by a backlog of new orders from major pharmaceutical companies, Samsung BioLogics, a leading bio company in South Korea, will invest some 1.74 trillion won ($1.47 billion) to build the fourth plant that would help it maintain its status as the world's largest contract manufacturing organization (CMO).

Samsung BioLogics said in a regulatory filing that the fourth plant with a bioreactor capacity of 256,000 liters at its manufacturing base in Songdo, about 30 kilometers (18 miles) west of Seoul, is aimed at strengthening "competitiveness by expanding biopharmaceutical production facilities."

CMO serves other companies in the pharmaceutical industry to provide comprehensive services from development through manufacturing. Samsung BioLogics has expanded its biomedicine business from CMO to contract development organization (CDO), which develops cell lines and production processes for the mass production of antibody-drug candidate substances developed at the laboratory level.

Through the construction of its fourth plant by the end of August 2023, Samsung BioLogics would increase its combined bioreactor capacity to 620,000 liters, which are enough to secure a market share of more than 30 percent in the global CMO market.

"If the fourth plant goes into operation, we will be able to occupy about 30 percent of the global CMO market," Samsung BioLogics CEO Kim Tae-han said in an online news conference. "We decided to proactively respond to the rapidly growing bio-medicine market and build our fourth plant considering the increasing proportion of CMO and CDO by global pharmaceutical companies."

Samsung BioLogics would have no problem raising funds for investment, Kim said, citing the company's high credit rating, a low debt ratio and an abundant cash reserve estimated at 860 billion won. The company plans to acquire more land in Songdo for new facilities, including an open innovation center for bio venture firms.

"The global demand for consignment production of medicines is increasing," Kim said. The new plant would feature efficient eco-friendly facilities and automation technologies. Construction will begin in the second half of this year for partial operation in late 2022.

Samsung BioLogics has clinched a series of orders, including a CMO deal worth $314 million in June from an unnamed European client for the consignment production of a biosimilar drug. Total orders stood at 1.8 trillion won in the first half of 2020.