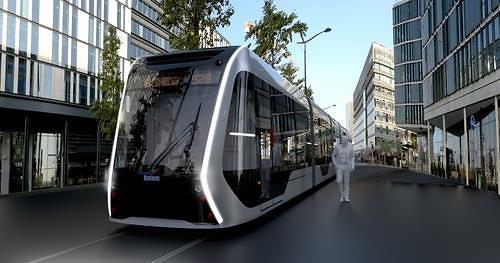 SEOUL -- In an effort to open an era of urban hydrogen-electric trams, Hyundai Rotem, a train-making subsidiary of South Korea's Hyundai auto group, will launch a state-sponsored demonstration project in the southeastern industrial port city of Ulsan. The project is seen as the prior phase of commercializing hydrogen-powered trains.

Ulsan signed an agreement with Hyundai Rotem to demonstrate and activate the supply of hydrogen-electric trams. The city will acquire government approval for the project and provide administrative support for demonstration routes and charging stations. Hyundai Rotem will manufacture trams, carry out a test run and establish a system such as signal and track.

In June 2019, Hyundai Rotem and Hyundai Motor unveiled a joint project to develop fuel cell electric trams and locomotives. They aim to develop trams capable of traveling more than 150 kilometers (93 miles) with a single charge at a top speed of 70 km per hour.

"In cooperation with the central government, we will actively support the development and demonstration of Hyundai Rotem's hydrogen-electric tram system, which has secured economic feasibility," Ulsan City Mayor Song Cheol-ho said, vowing to open an era of hydrogen-electric trams in the region.

Because of its eco-friendly characteristics, fuel cells are considered the next-generation renewable power source. Fuel cells produce heat, electricity and water through a thermochemical reaction between hydrogen and oxygen. The Ministry of Land, Infrastructure and Transport has called for the commercialization of hydrogen-powered trains after 2025.

Ulsan, home to Hyundai Motor and other big manufacturing companies, has led an energy revolution with a series of projects, such as a floating wind farm with a capacity of 1.0 GW. Hyundai is pushing for a hydrogen business value chain to popularize fuel cell cars, heavy-duty trucks, construction equipment, trains and ships, along with the establishment of charging infrastructure.

The Seoul government has adopted hydrogen fuel cells and electric batteries as a mainstream fuel in the future with a roadmap to produce 6.2 million fuel cell vehicles for domestic consumption and exports by 2040. Hyosung has partnered with Linde, a Dublin-based engineering group, to build a liquid hydrogen plant capable of producing 13,000 tons of liquid hydrogen per year in Ulsan.