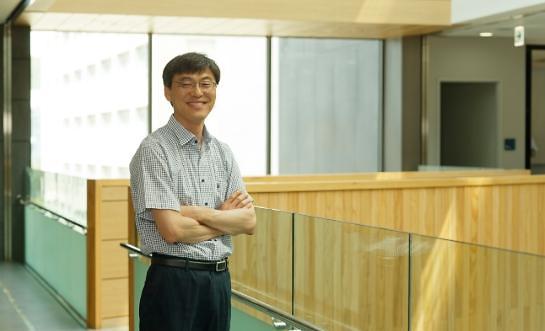 A picture released by Ulsan National Institute of Science and Technology shows Jeong Kyeong-min, a professor of energy and chemical engineering. [Courtesy of UNIST]

Lithium metal batteries could run longer and hold more energy than lithium-ion batteries, which work by passing lithium ions between a graphite anode and a lithium cobalt oxide cathode. Due to their large specific capacity and the lowest reduction potential of metallic lithium, researchers have tried to develop high-energy-density lithium metal batteries.

"The goal is to mass-produce high-capacity batteries while taking advantage of current battery production facilities and manufacturing technology as much as possible," team leader Jeong Kyeong-min, a professor of energy and chemical engineering, said in a statement posted on the website of UNIST.

Jeong said the team's work would help South Korea's battery industry secure its competitiveness quickly. "If the research goes smoothly, we expect to commercialize electric vehicle batteries that can travel up to 600 kilometers (373 miles) on a five-minute charge."

South Korean battery makers have tried to develop premium batteries. In February 2019, SK Innovation (SKI) agreed with PolyPlus Battery, a lithium battery developer based in California, to commercialize lithium-metal batteries. SKI plans to complete research on conductive glass separators by the end of 2021 and apply them to the development of lithium metal batteries.