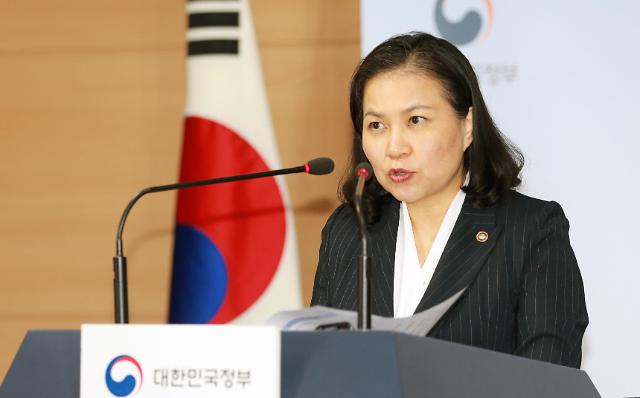 [Courtesy of Ministry of Trade, Industry and Energy]

"I want to rebuild trust in the multilateral trading system by making it more relevant, resilient, and responsive," Yoo said in a Twitter post uploaded in early August. "WTO should continue to play an active role in facilitating trade" amid a COVID-19 pandemic, she said.

Yoo, 53, began her career as a civil servant at the Ministry of the Interior and Safety, formerly known as the Ministry of Government Administration, in 1992. Motivated by what she saw during Uruguay Round negotiations, she felt that her country needed a trade expert and applied for a position at South Korea's trade ministry in 1995. Since then, she has honed her skills as a trade expert at various government posts.

Her experience played an indispensable role in finalizing FTA negotiations between South Korea and China that took effect in 2015. Three years later, she was promoted to the position of deputy trade minister and participated in negotiations to amend South Korea's free trade accord with the United States. As trade minister in 2019, she played a key role in the conclusion of text-based negotiations for the Regional Comprehensive Economic Partnership (RCEP), a free trade agreement in the Indo-Pacific region.

At the height of a COVID-19 pandemic that has reduced global trade, Yoo introduced the so-called "Post COVID-19 Trade Policy" in June to reset South Korea's trade policy in response to changes in the international trade environment, emphasizing international cooperation and rule-setting.

"Because the WTO is at a crisis, not in ordinary times, member states are focusing on the evaluation of Director-General candidates' ability and qualifications to achieve its practical reform," Yoo once told a press conference.

South Korea has been locked in a prolonged trade dispute with Japan since Tokyo strengthened regulations on exports of key materials used for the production of semiconductors and displays. However, Yoo has vowed to implement fair policies for member countries without any political bias if she becomes the officer responsible for supervising and directing WTO's administrative operations.

There will be 44 votes from Africa, 40 from North America and Europe, 31 from South and Central America and 49 from Asia-Pacific. Compared to the size of economy, there are relatively fewer members in Northeast Asia than other regions and the possibility of support from member states remains uncertain. Africa has a relatively large number of regional members.

WTO members seem to recognize Yoo's competitiveness as she could receive support from African member states. Unlike other candidates, she also has rich experience and expertise in trade and is an incumbent trade minister with a higher understanding of trade.

"Other candidates can basically receive support in the region, but South Korea has no such support. So we must work hard on our own two feet," Yoo said, vowing to conduct an election campaign centered on communication.

For her first-round campaign, Yoo will focus on presenting her ideas and visions and matching the interests of member states. Due to the COVID-19 pandemic, she will launch an online campaign for a while before visiting major countries in late August or early September for face-to-face contact.

The campaign period will run through September 6. From September 7, a three-round consultation process between member states will be carried out for up to two months. Member states would reveal their preferred candidates at each round. Three candidates will be eliminated in the first round and three others in the second round. One of the two finalists will be picked in the final third round. Through this process, a consensus will be reached to appoint Directory-General.

Yoo has bee working intensively, sleeping three to four hours a day. "I will do my best until the end, thinking WTO Director-General is a honorous post, a great obligation and the last chance of my public career."