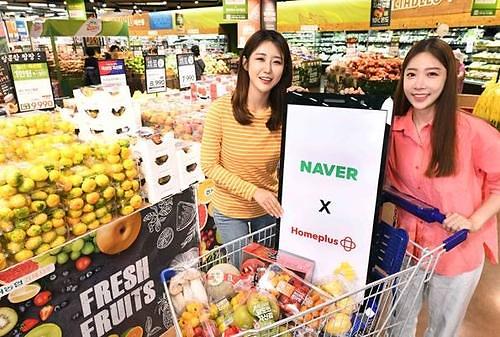 Marketplaces have been the main source of grocery shopping in South Korea for decades, attracting customers with a variety of products and at lower prices than megastores and supermarkets. However, they had been shunned by young consumers who preferred using credit cards at online shopping malls. There used to be some 1,600 marketplaces nationwide, but the number has been reduced to 1,450 in 2019, according to the Ministry of SMEs and Startups.

Customers using Naver's marketplace delivery service can choose a nearby marketplace, food and groceries. Purchased products are delivered within a few hours. Naver offers cash points as rewards. The service received unexpected attention from consumers looking for a convenient way to shop online at a low cost and orders made in June were 15 times more than a year ago.

The COVID-19 pandemic has brought fresh changes to South Korea's online food and grocery market. Such convenient online services, which were once seen as the exclusive property of young consumers, have attracted middle-aged and old consumers. According to a survey of 500 South Koreans aged more than 50 years old, conducted this year by LINA Foundation, 32 percent said that they tried using online shopping malls.

Sales of Coupang, a South Korean version of Amazon, in May were up 13.5 percent on-year. School Food, a snack delivery franchise, saw sales in the first half of this year increasing 30 percent from a year ago.

Conventional food delivery platforms have quickly reacted to the change in consumer reaction. Baedal Minjok, the country's favorite food delivery service, has aggressively established logistics centers in residential districts in Seoul and other major cities to beef up its one-hour grocery delivery service. In August, GS25, a convenience store franchise operator, launched an on-foot grocery delivery service that covers a 1.5-kilometer radius from each store. Anyone aged over 18 can apply to become a deliveryman who carries small packages for a fee of up to 3,200 won ($2.7) per run.

The pandemic also prompted consumers to subscribe for regular deliveries of meal kits and Banchan, a collective term meaning Korean side dish menus. For an average monthly fee of about 10,000 won, customers are delivered with easy-to-cook meal kits and Banchan. According to a July survey of 1,374 people, conducted by the Korea Agro-Fisheries & Food Trade Corporation (aT), 52 percent used meal subscription services. People in their 40s were the age group with the highest subscription rate of 60.2 percent.