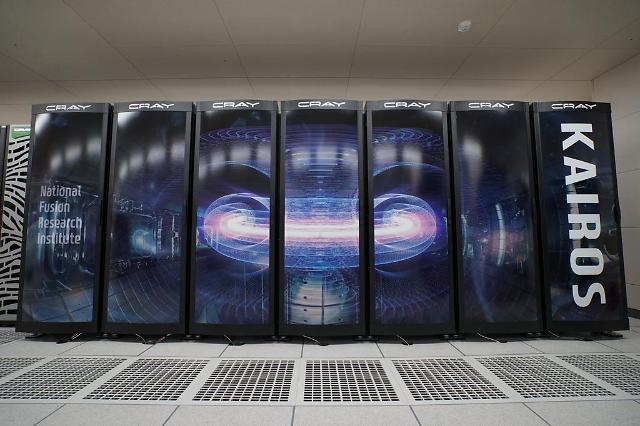 SEOUL -- A new supercomputer has been established at South Korea's state research body involved in an international project to build a fusion reactor that can provide mankind with a limitless energy source. The supercomputer can be used for the theoretical and simulation research of fusion plasma that is essential for the commercialization of fusion energy.

A new supercomputer called "KAIROS" with a maximum theoretical performance of up to 1.56 PFLOPS was put into operation at the National Fusion Research Institute (NFRI) to develop simulation codes for the interpretation and prediction of experiments related to the International Thermonuclear Experimental Reactor (ITER) to be built in Cadarache, France. Previously, the institute has used a 60 TFLOPS supercomputer established in 2011.

Supercomputers are used for a wide range of computationally intensive tasks in various fields. The performance of a supercomputer is commonly measured in floating-point operations per second (FLOPS). A 1 teraFLOPS (TFLOPS) computer system is capable of performing one trillion FLOPS. A 1 petaFLOPS (PFLOPS) system can perform one quadrillion FLOPS.

Fusion power, generated by nuclear fusion, has long been spotlighted as a safe next-generation power source capable of reducing radioactivity. However, commercialization has a long way to go because it's extremely difficult to produce a state of controlled fusion. A tokamak to be housed in a seven-story structure in reinforced concrete is an experimental machine designed to harness the energy of fusion.

"The role of high-performance supercomputers is growing as research using technologies related to the Fourth Industrial Revolution such as machine learning and AI is expanded in nuclear fusion research," NFRI head Yoo Suk-jae said. "With the establishment of KAIROS, we have secured soft power for nuclear fusion research."

In the supercomputer field, South Korea falls far behind the United States, China and Japan. South Korea’s largest high-performance computing system, Nurion, was put into operation in November 2018 at the state-run Korea Institute of Science and Technology Information (KISTI) in the central city of Daejeon.

In March, South Korea unveiled a three-year state project to develop independent technologies for a high-performance computing system, better known as a supercomputer, starting with the development of technologies for designing software and hardware for a central processing unit.