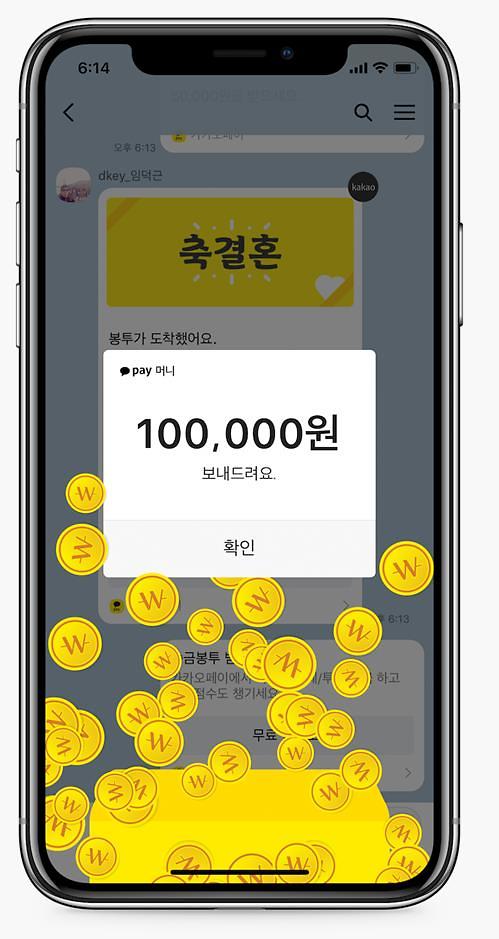 SEOUL -- A coronavirus pandemic prompted South Koreans to use digital payment as gift or condolence money for weddings and funerals more frequently as the level of social distancing was heightened due to a sudden increase in COVID-19 cases that followed an anti-government rally by thousands of right-wing Christian activists in the center of Seoul.

South Korea has a tradition of offering money for the hosts of weddings and funerals. The money work as an aid that eases the financial burden. The name of a giver is handwritten on an envelope containing cash at wedding or funeral venues before being offered to the host with simple words of congratulation or condolence.

Kakao's gift money transfer service is simple and convenient and delivers digitalized messages. Kakao said that the service showed no noticeable increase in its usage earlier this year when a COVID-19 epidemic started to spread in South Korea, but the rate rose after Seoul City heightened the level of social distancing from August 23 to prevent an explosive increase in new cases.

Seoul's decision was made after a rally involving right-wing Christians in central Seoul on August 15. Hundreds of new COVID-19 cases were related to the rally, leading to a nationwide increase in the number of COVID-19 patients. Health officials had hard time tracking down people who participated in the rally as some were reluctant to cooperate, turn off smartphones, or provide false information.

The Korea Centers for Disease Control and Prevention (KCDC) has applied strengthened quarantine rules to limit the number of participants in outdoor gatherings and impose a temporary lockdown at crowded facilities such as buffet restaurants, PC cafes and fitness centers.