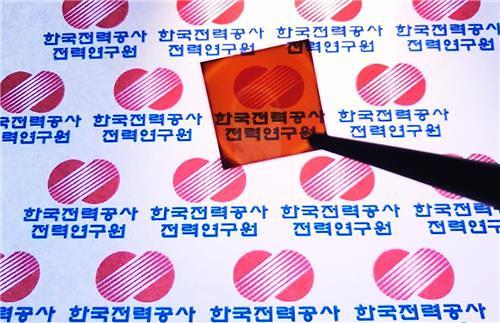 KEPCO said in a statement on August 26 that the company has signed a memorandum of understanding with UniTest. KEPCO said it would apply window-type solar panels to warehouses, factories, the roof of building-type parking lots and the sunroof of cars.

"If these panels are installed on a 20-story building, it will become a 20kW-class power plant that can reduce greenhouse gas emissions by 201 tons annually," a KEPCO official said. Electricity generated by window-type solar panels is stored in energy storage systems (ESSs) or small-sized batteries installed in houses. Electricity can also be sold back to the state power company.

Unlike conventional silicon solar panels that are produced in extreme heat above 1,000 degrees Celsius (1,832 Fahrenheit), window-type ones are produced in lower temperatures of less than 200 degrees with lesser costs. The power generation capabilities of both solar panels are at a similar level, KEPCO said.

UniTest will play a vital role in the joint project as it owns the technology to maximize the surface area of window solar panels. KEPCO said that for commercialization, it needs to create a solar panel in a size larger than 10 by 10 centimeters.

Currently, many companies are in the race to develop clean energy generating devices including solar panels. On August 18, SK Engineering & Construction, the infrastructure-building wing of South Korea's SK Group, showcased a window-type solar power generation system that comes with an electricity distribution system for the first time in the country.