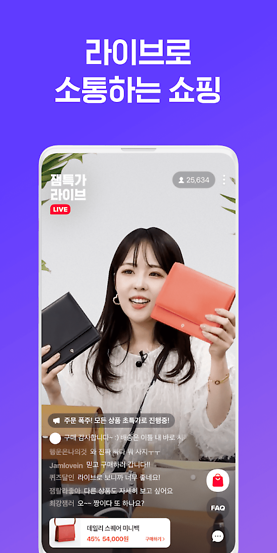 
SEOUL -- Naver, South Korea's largest web portal service operator, has absorbed the live stream commerce service of its subsidiary to gain the upper hand in the mobile live home shopping market where competition got fierce as people spent more time at home due to a coronavirus pandemic.

Naver said in a statement on August 27 that it has absorbed "JAM LIVE," a live commerce service operated by the web service giant's subsidiary SNOW, to create synergy between its online shopping services. JAM LIVE was launched in 2018 as an online quiz show, which attracted businessmen and students with cash rewards, and became a live commerce service last year that interacts with consumers in real-time.

Naver and Kakao, the operator of the country's favorite messenger app Kakao Talk, have started their own live commerce services for individual sellers and retailers this year. According to Naver, more than 50,000 shoppers participated in a live commerce show selling beauty products in May.

Lotte Mart, the megastore wing of South Korean conglomerate Lotte Group, has also joined the race to become the country's top live commerce operator. On August 27, the megastore franchise operator launched "Grip," a live commerce app, in an effort to digitally transform its megastore chain from the previous traditional-type marketplace to a real-time digitalized marketplace for young consumers.