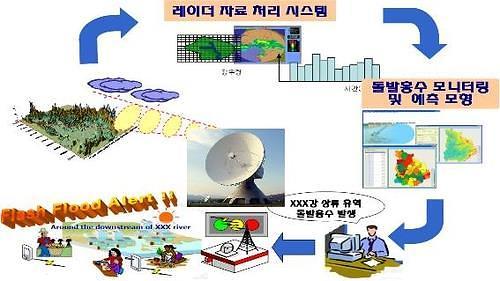 [Courtesy of the MInistry of Environment]


SEOUL -- In an effort to reduce unexpected damage caused by weather-related disasters, South Korea will adopt a flood forecast system utilizing artificial intelligence, radars and satellites. Data-collecting sensors will be set up at some 100 rivers and creeks and weather radars will detect torrential rains.

South Korea was battered by a long rainy season that lasted more than 52 days this summer and left about 50 people killed or missing. The Ministry of Environment said in a statement on August 30 that about 49.8 billion won ($42.2 million) would be spent on developing an AI-based flood forecast system by 2025.

The ministry said that weather radars can make forecasts some one hour before actual rain clouds hit an area. Torrential rains send the amount of rainfall exceeding the water disposal capability of city infrastructure or natural environments to cause floods and landslides. A 500 kilogram-class satellite will be developed by 2025 to monitor an area that is 120 kilometers (74 miles) wide twice a day.

To fight climate changes, South Korea has revealed a 500 billion won project this year to digitalize its flood management system at a total of 3,850 floodgates in rivers and creeks that cover about 3,275 km. Floodgates, also known as sluice gates, are used by farmers to drive water into farming fields. They are controlled manually by village leaders. Sometimes people get injured or killed while trying to manipulate floodgates manually.