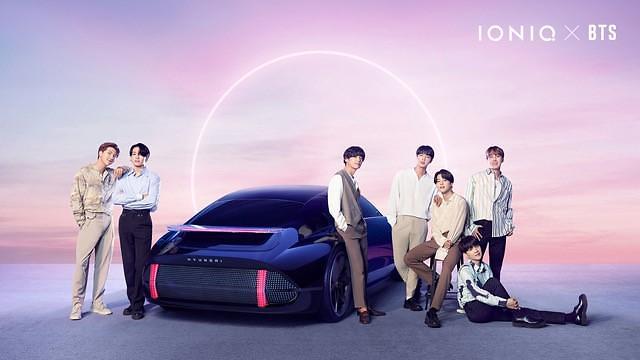 SEOUL -- To celebrate the launching of its new electric vehicle brand IONIQ, Hyundai Motor has collaborated with K-pop sensation BTS to release a new single.

The new EV lineup features ultra-fast charging, spacious interior and future innovations that combine design, technologies and services to integrate in-car and out-of-car experiences for a seamless journey The first model of the IONIQ brand, a mid-size crossover utility vehicle, will hit the market in 2021, followed by an IONIQ sedan in 2022 and a large-sized SUV in early 2024.

Hyundai said in a statement on August 31 that BTS would release "IONIQ: I'm On It," a digital single, through the carmaker's global website at 7:00 p.m. (1200 GMT). The music video will be released through YouTube and other social media at 11:00 a.m. on September 2.

Through collaboration with BTS, Hyundai hopes to deliver a young and eco-friendly brand image of IONIQ to young consumer groups including MZ generations (millennial and the Z generations).

The carmaker said it wishes to promote the value of a good-hearted brand image through BTS' music and voices. The digital single can be downloaded from Hyundai's website. The carmaker and BTS had collaborated to promote Hyundai vehicles since 2018.