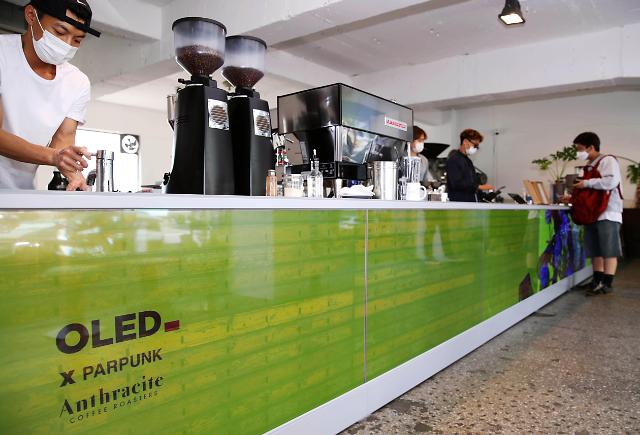 On the first floor of a cafe in Itaewon, a shopping and entertainment district near central Seoul, seven 55-inch transparent OLED panels were connected to install a digital art wall that is 9 meters wide and allows visitors to experience the meeting of advanced display technologies and art not only inside the store but also outside.

LG Display said in a statement that five panels were used for an exhibition of media art in another cafe in western Seoul. "Transparent OLED enabled fantastic production like a hologram. That will inspire artists and give visitors a new experience," Park Hun-kyu, a media artist, was quoted as saying.

LG Display said it would actively explore opportunities for new businesses by utilizing transparent and new form factors. "We will provide an optimized platform for media art with accurate color representation and high design freedom, which are advantages of OLED," said an unnamed LG Display official.

Because transparent OLEDs do not need backlights, they can be used for self-driving cars, aircraft, subways and smart buildings. In August, LG Display used transparent OLED for the windows of subway cars in two Chinese cities, Beijing and Shenzhen, showing passengers traffic information and daily life information such as weather forecasts and news.

LT Display has established a lineup of premium OLED displays, which are transparent, flexible and rollable. Transparent OLED screens display black content as transparent, allowing designers to overlay digital content such as images, text and video onto real-life objects placed behind the transparent screen.