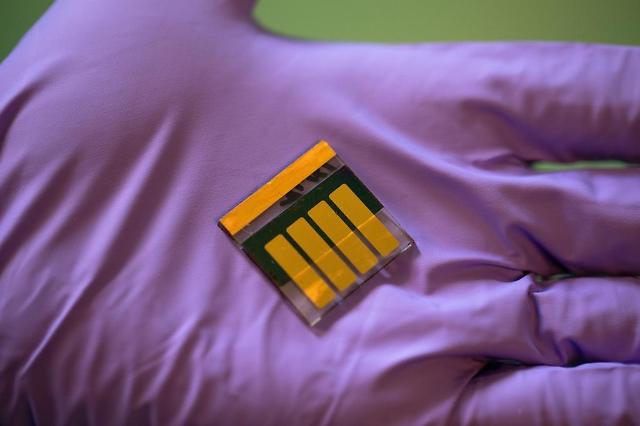 Perovskite derivatives have been investigated to overcome instability issues with lead-based organic perovskite materials in ambient air and reduce the use of lead. New techniques and higher efficiencies have been achieved. In September 2019, a new efficiency record of 20.3 percent was set with a module of 11.2 square centimeters.

The high efficiency of the complex organic molecule, Spiro-OMeTAD, as hole-transporting material for perovskite solar cells requires the use of hygroscopic dopants that decrease stability.

A joint research team involving researchers from Ulsan National Institute of Science and Technology (UNIST) and the Korea Institute of Energy Research has synthesized hydrophobic fluorinated analogs of Spiro-OMeTAD as hole-transporting materials that have the favorable shifting of the electronic state for hole extraction and used them to fabricate perovskite solar cells.

"The research on the development of an organic hole transport layer with high efficiency and stability has been going on for 20 years, but it has been difficult to find a material that can satisfy both properties at the same time," said Yang Chang-duk, a professor at UNIST's school of energy and chemical engineering. "We solved the two properties that were difficult to reconcile at the same time with the introduction of fluorine atoms."

Along with long-term stability in wet conditions without encapsulation, a champion device had a certified power conversion efficiency of 24.8 percent, Yang's team said in the abstract of a research paper on the website of Science.

The device could maintain more than 87 percent of the original power conversion efficiency under 50 percent relative humidity for more than 500 hours, the research paper said. "Considering the benefits of fluorination to conjugated materials for energy levels, hydrophobicity, and noncovalent interactions, two fluorinated isomeric analogs of the well-known hole-transporting material Spiro-OMeTAD are developed."