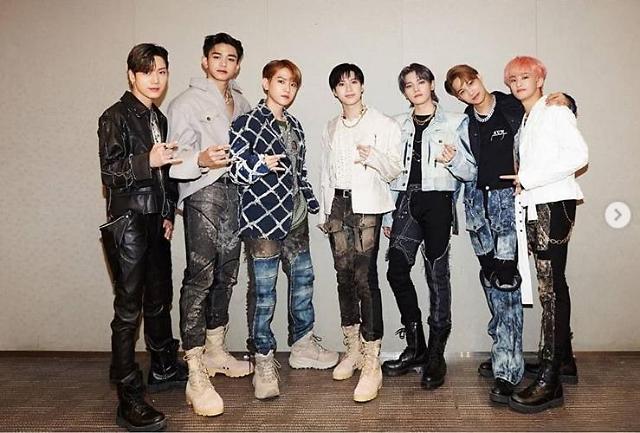 
SEOUL -- SuperM, an all-star unit band formed by SM Entertainment, an entertainment powerhouse in South Korea, hopes to give positive and hopeful energy to fans in a difficult time caused by a COVID-19 pandemic through the group's first full-length album titled "Super One" that contained 15 songs.

"There are many different genres of songs. It seems that the color of SuperM has finally come out clearly," SuperM leader Baekhyun said in an online news conference on September 25 before releasing Super One. The title track "One" is a hybrid remix that combined the second track "Infinity" and the third track "Monster."

Inspired by the stellar success of K-pop sensation BTS, SM has launched SuperM including Baekhyun and Kai of EXO, SHINEE's Taemin, NCT's Taeyong and Mark, and WayV members Lucas and Ten. SuperM demonstrated its potential in the American music scene by topping Billboard's 200 albums chart in October 2019 with "SuperM: The 1st Mini Album."

"In fact, we felt a lot of pressure because we ranked No. 1 on Billboard 200 with our debut album, but we will be satisfied if this album can arouse strength a little bit in a difficult time. I hope the album can give positive and hopeful energy," Baekhyun said. "I hope things will be better soon so that we can meet fans offline and perform on stage."

SuperM members came from different teams, but they wanted to show unity and hope, Kai said. "We're from different teams, and I want to show you what kind of synergy we're going to have from our unity. It's a message that goes through the album," he said. "I hope many people will have hope while listening to the album, and I hope they feel a little bit of happiness."

The title track, Taemin said, created a synergy by combining two songs that are unlikely to match. "In the process of completing two songs with completely different colors, I felt a sense of accomplishment challenging new things," he said, adding that SuperM is a performance group but it is "versatile enough to show through voice or emotion lines."

Through Monster that carried a message to overcome difficulties, Lucas said fans can feel intense energy, while Infinity is a brighter song that shows off the vocals of Baekhyun and Taemin.