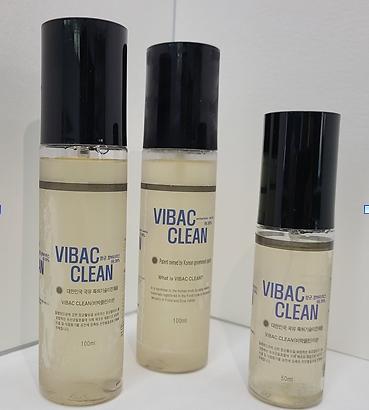 This picture released by the environment ministry shows the prototypes of cleaning agents containing NIBR97 culture fluid.[Courtesy of the Environment Ministry]


SEOUL -- The COVID-19 pandemic has caused a surge in demand for chemical disinfectants such as alcohol. As a natural alternative, South Korean researchers found that a lactic acid bacterium isolated from kimchi, a traditional Korean fermented vegetable dish, showed significant antibacterial activities.

Related technology developed in a research led by the National Institute of Biological Resources (NIBR) has been transferred to private companies for commercial production, the Environment Ministry said in a statement published on September 28, adding that prototypes of cleaning agents have applied for inspection and approval by the U.S. Food and Drug Administration.

"At a time when the use of disinfectants is increasing significantly due to the spread of COVID-19, the study is meaningful in that it opens the possibility of replacing the disinfectant alcohol with autogenous lactobacillus," NIBR President Bae Yeon-jae was quoted as saying.

The antiviral effect of lactobacillus plantarum NIBR97, a lactic acid bacterium isolated from kimchi, has been verified in a test on murine hepatitis virus and low pathogenicity avian influenza, the environment ministry said, suggesting it can be used in functional products such as cosmetics and food.

NIBR97 showed significant antibacterial activities against a broad range of pathogens and HIV-based lentivirus and the flu virus H3N2, the research team said in a paper published on the website of Pharmaceuticals, an open-access journal. "We suggest that the cell-free supernatant from Lactobacillus plantarum NIBR97, including novel bacteriocins, has potential as a natural alternative to chemical disinfectants."

Lactic acid bacteria produce diverse antimicrobial substances and are seldom hazardous to humans, NIBR97 destroyed most viruses when it was used for the HIV virus that eliminated pathogenicity, the research team said. "Our study will provide important information that will guide new strategies to replace chemical disinfectants with natural substances."

"Our data showed that the cell-free supernatant from L. plantarum NIBR97, producing novel bacteriocins, has superior antibacterial and antiviral activities during both short and long exposures, which suggests that it is potentially useful as a natural material to completely or partially replace chemical disinfectants."