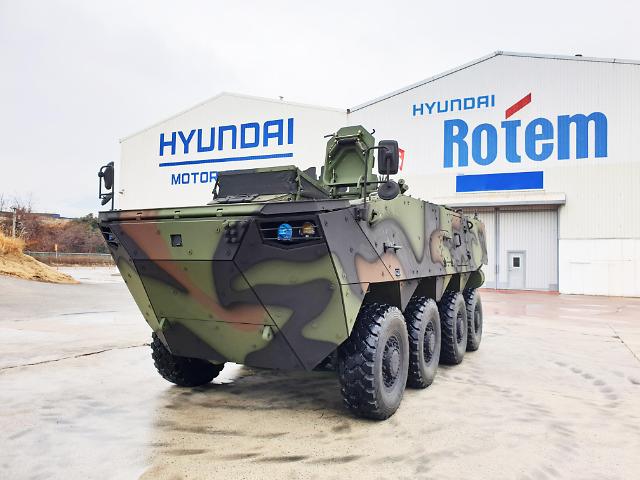 
SEOUL -- Hyundai Rotem, a subsidiary of South Korea's Hyundai auto group, has secured a defense order worth 407.7 billion won ($348.6 million) to deliver the third batch of K806 and K808 wheeled armored vehicles that would replace the aging series of tracked armored personnel carriers. They have an all-welded steel armor hull and provide protection against small arms fire and artillery shell splinters.

The order from the Defense Acquisition Program Administration (DAPA), a state body controlled by the defense ministry, calls for the delivery of K806 and K808 wheeled armored vehicles by 2023. The first batch worth 26.9 billion won began in 2018, followed by the second batch worth 412.9 won.

Armed with a 12.7 mm machine gun and fitted with a central tire inflation system and run-flat tires, the K806 model for the defense of rear areas and the protection of convoys can run at a maximum road speed of up to 100 kilometers (62 miles) per hour with up to nine fully-armed soldiers aboard.

The larger and amphibious K808 model operates in frontline areas. The amphibious speed on water is up to 10 km/h. Depending on customer requirements, it can support a turret armed with a 30 mm cannon, or other weapons.