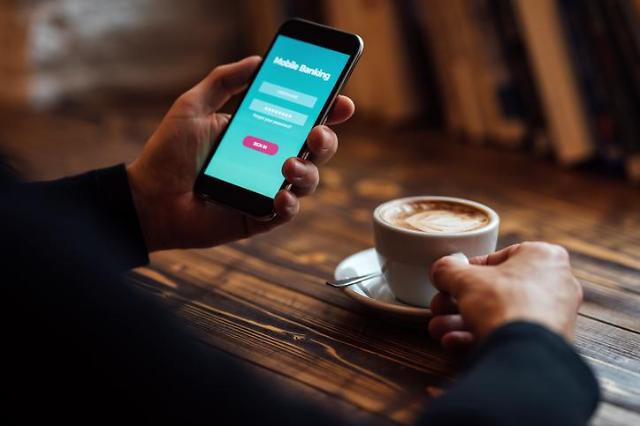 
SEOUL -- The rate of South Koreans visiting banks for money withdrawal, deposit and transfer has been down thanks to a growing number of online and mobile banking users. As people of all ages use smartphones for bank businesses, South Korean banks expand online banking services including dedicated smartphone apps.

According to central bank data on October 6, the rate of customers visiting offline banks to withdraw and deposit money was 7.4 percent in the second quarter of this year, the lowest in 15 years, while the rate of those using online or mobile banking services reached 64.3 percent. The usage rate of automated teller machines (ATMs) has decreased by 6.4 percent on-quarter.

The Bank of Korea predicted that the rate of people visiting offline banks will decrease further as smartphone banking apps provide convenient and quick loan services. About 81 trillion won worth of transactions were made using digital payment systems operated by digital banks and online shopping services in 2019.

Kakao Pay, operated by the country's web service giant Kakao, is a key player in South Korea's digital payment market with more than 20 million users who make transactions worth four trillion won every month. Samsung Pay allows Galaxy phone users to store credit and cheque card information inside their phones so that they can conveniently make transactions at offline stores without actual cards.

Naver, the operator of South Korea's largest web portal, runs the biggest digital payment system. Naver links digital payment and shopping services to provide special benefits such as cashpoints. According to Wiseapp, an online market research firm, over 1.2 million Naver Pay users spent 5.2 trillion won in the first quarter of this year, up 46 percent from a year ago.