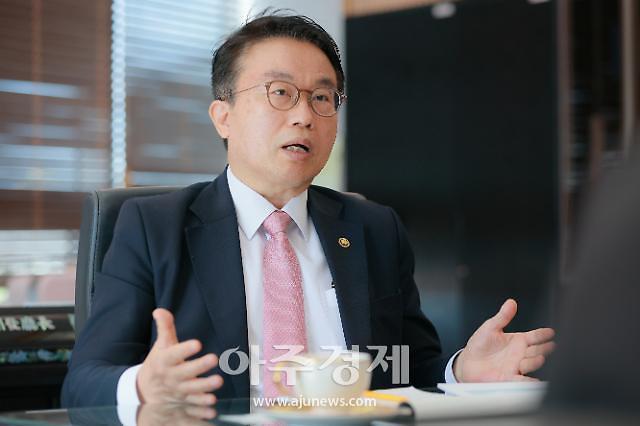 
SEOUL -- A vast area of reclaimed land, which was created by the world's longest man-made sea barrier on South Korea's west coast, remains desolate due to slow development, but developers believe it has ample potential to become the pivot of a hydrogen industry if the proposed construction of a massive renewable energy complex using wind and sunlight is done.

A seawall stretching 33 kilometers (20 miles) was built in 2010 to convert an estuarine tidal flat in Saemanguem into agricultural or industrial land. The sea barrier created an area of about 400 square kilometers and a freshwater reservoir. However, the development of Saemangeum near the southwestern port city of Gunsan has been sluggish. Environmental groups have expressed concern about a waste of taxpayers' money and pollution.

In an effort to speed up development and attract investment, President Moon Jae-in came up with a fresh project in 2018 to build the world's largest solar power complex and a large-scale offshore wind farm in Saemanguem. However, companies are still reluctant to invest mainly due to the lack of transportation infrastructure and other facilities.

The Saemangeum Development and Investment Agency (SDIA) has vowed to attract investment by using renewable energy as a sweetener. "Renewable energy-related projects are being carried out in earnest in Saemangeum," SDIA administrator Yang Choong-mo said in an interview with Aju Business Daily. "By 2030, Saemangeum's offshore solar energy will contribute significantly to raising the share of renewable energy to 20 percent."

In order to produce "green" hydrogen using water, electricity must be obtained through renewable energy sources. Yang suggested that Saemangeum would become the center of South Korea's hydrogen economy as it is equipped with conditions to utilize hydrogen energy topologically. Hydrogen has to be extracted from other compounds by a chemical process. Experts regard green hydrogen made with wind and solar electricity as the most efficient form of clean energy.

Renewable energy inevitably leads to surplus power and the hydrogen electrification of surplus renewable energy enables "a true mass supply of green hydrogen," Yang said. "If the current carbon-centric economy is changed to a hydrogen economy, it will be possible to respond to fine dust and climate change, and it will have a significant impact on society as a whole."

Because of growing concerns about a dwindling supply of oil and emissions of pollutants, some countries have tried to adopt hydrogen fuel for their public transport system. The Seoul government has adopted hydrogen fuel cells and electric batteries as a mainstream fuel in the future with a roadmap to produce 6.2 million fuel cell vehicles for domestic consumption and exports by 2040.

"We still have a long way to go, but that's not impossible," Yang said. The government aims to make Saemangeum a future national growth engine by attracting investment from "anchor" companies, he said, referring to SK Group units which agreed to invest two trillion won ($1.7 billion) by 2029, including one trillion won to build submarine fiber-optic cables and one trillion won for the establishment of a mega data center.

"It has been difficult to attract investment, but since last year, some achievements have been made by providing long-term rental land to industrial complexes. However, most of them are small and medium-sized enterprises, except for those that moved into the early stages of the project, so we need to attract large companies with high impact," Yang said. "Starting with investment from large corporations, we hope that large-scale investment by competitive companies will be made in Saemangeum."

To expedite reshoring, which is the process of returning the production and manufacturing of goods back to a company's original country, Yang said that a dedicated complex would be built in Saemangeum, along with bold incentives such as subsidies and consulting fees. He pledged the quick establishment of transportation infrastructure to address low accessibility which has been cited as the main reason for sluggish development.