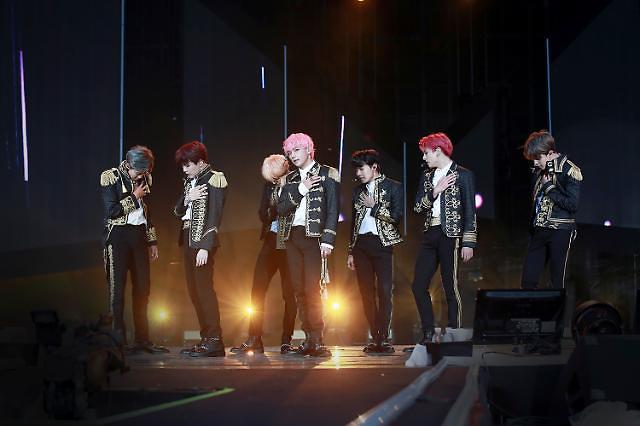 
SEOUL -- Whether they like it or not, the argument without their consent and participation goes on from home and pubs to parliament. Fans feel repulsed by excessive interest and contention.

A fresh round of debate flared over whether BTS members should be exempted from military service for enhancing the prestige and image of their homeland after they captured the hearts of global music fans with "Dynamite," a disco-pop track that debuted at No. 1 on Billboard's main singles chart.

Regardless of political orientation, many people in South Korea regard them as valuable national assets and show great interest in their steps going forward. Their military service emerged as a pressing concern this year because the oldest member Jin said in a press conference in February that his military service is a natural duty. "I will respond whenever I have a call from my country," said the 27-year-old.

There has been tacit consent from other members who want fans to refrain from making much ado about their military service. However, politicians, especially from South Korea's ruling camp, were impatient, opening a series of debate despite a gag order from Lee Nak-yeon, a former prime minister who now heads the ruling Democratic Party as a potential presidential candidate.

In September, Jeon Yong-ki, a ruling party member, proposed a revision to South Korea's military service act to enable the postponement of conscription or recruitment for outstanding people in the field of pop culture and arts on recommendations by the Minister of Culture, Sports and Tourism for enhancing South Korea's national status and dignity.

Culture, Sports and Tourism Park Yang-woo has always taken a favorable attitude over military service by BTS members, heaping praise on their stellar achievement abroad. "It needs to be reviewed prospectively," he said in a parliamentary audit on October 7.

However, military officials remained unchanged in their position that sufficient discussion and national consensus are needed in advance. "There should be various social consensus, but we are not considering military service exemption at this stage," Defense Minister Suh Wook testified in parliament, suggesting that a postponement of enlistment is possible in view of durational activities by BTS members.

Compulsory military service is required for all able-bodied men aged between 18 and 35. Olympic medalists or Asian Games gold medalists are exempted from military service. Fine arts have received benefits such as alternative service in non-military spots. After completing four weeks of basic training, outstanding artists should do 544 hours of volunteer work using their special skills, but there are no rules regarding pop-artists.

Military service has been a sensitive topic. Steve Yoo, a Korean-born American singer, had gained popularity for his sporty image and explosive dancing style until he acquired U.S. citizenship in 2002. He has been banned from entering South Korea for widespread criticism that he changed nationality to evade military conscription.