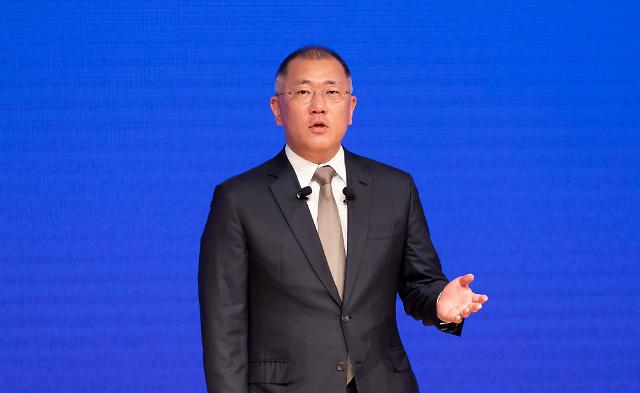 SEOUL -- South Korea's Hyundai auto group promoted Chung Eui-sun as chairman to replace his bed-stricken father who has stayed away from daily group affairs since he disappeared from public eyes in 2018 amid rampant speculation about his health. The promotion heralded the completion of the hereditary third-generation succession of group leadership.

The group's board approved the appointment of Chung Eui-sun, 49, as chairman at a meeting on October 14. Since he became the group's executive vice chairman on September 14, 2018, Chung Eui-sun has exercised undisrupted control over the country's second-largest conglomerate in the absence of his father who was hospitalized for colonic diverticulitis in mid-July.

The 82-year-old ex-chairman disappeared from public eyes in 2018. A year later, the Fair Trade Commission (FTC), a state anti-trust watchdog, recognized him as chairman, saying there was plenty of room for Chung Mong-Koo to exercise control over his group normally through a person associated with him.

Hyundai has tried to streamline its complicated governance structure in a bid to move away from traditional car manufacturing to smart mobility solutions. This year, the group expanded investment in self-driving technology, electric and hydrogen vehicles and mobility services.

The new chairman has called for a drastic structural change to become a key player in the production of personal air vehicles (PAVs). Through collaboration with Uber, Hyundai unveiled its first electric air vehicle concept, S-A1, at a trade fair in Las Vegas.

At a virtual groundbreaking ceremony on October 13 for an innovation center in Singapore, Chung Eui-sun called for human-centered mobility value chain innovation. "We will offer products and services tailored to customers' needs," he said, promising to use the center for "a mobility paradigm shift."

Hyundai is involved in a state project to commercialize urban air mobility (UAM), which is an ecosystem covering PAVs and infrastructure such as a new navigation system, take-off and landing fields and charging technologies. PAVs or flying cars are emerging as a future system of travel to avoid traffic jams on urban roads as the doorstep-to-doorstep average speed for cars is predicted to degrade further.

In his first message as chairman, Chung Eui-sun urged the group to implement eco-friendly transportation that can be easily used by all customers. "To ensure the safe and free movement of mankind, we will develop the most innovative and reliable self-driving technology in the world to realize a new mobile experience for our customers."

"We will provide a new level of life experience for mankind by realizing the future in our imagination such as robotics, urban air mobility and smart cities more quickly," the new chairman said.

Chung Eui-sun, born in Seoul in 1970, joined Hyundai Mobis in 1994 and left to study for an MBA at the University of San Francisco before returning to climb up the ladder through a number of posts at Hyundai Motor and its affiliate, Kia Motors. Some conglomerates have been undergoing a generational change. Of the third and fourth-generation members of conglomerate owners, Chung Eui-sun has been cited by market watchers as the promising next leader who can properly manage the auto group.