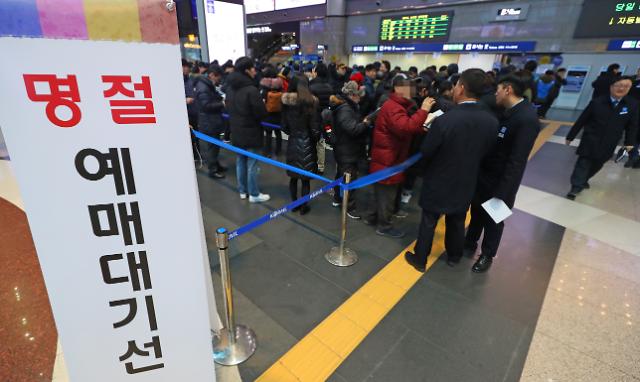 Hundreds of people stand in long lines to buy train tickets to their hometowns before Seollal, the Korean New Years' holidays. [Yonhap Photo]


SEOUL -- More and more train travelers in South Korea chose to use a convenient smartphone reservation system instead of standing in a queue at stations to buy tickets, data released by the state railway operator showed. The number of tickets purchased by train travelers with smartphones accounted for 76.8 percent of total tickets sold in 2019.

It is common to see a long line of people filling the main hall of Seoul Station, the main railway hub in South Korea, to buy train tickets when they go to their hometowns during important national holiday seasons. While the younger generations reserve tickets online, old people still bear the hassle of visiting stations.

For seasonal home-bound trips, thousands of people used to visit Seoul Station and wait for a long time to buy tickets. Many failed to reserve seats and bought standing tickets or used buses that traveled through jammed highways for many hours.

According to Korea Railroad Corporation (Korail), 117 million train tickets were purchased using a smartphone app in 2019, compared to 97 million in 2017. In 2019, seven million tickets were sold through the railway operator's website and 32 million through stations. Korail provides a digital ticket service through its smartphone app that serves as a customer service channel for passengers to request services and file complaints.