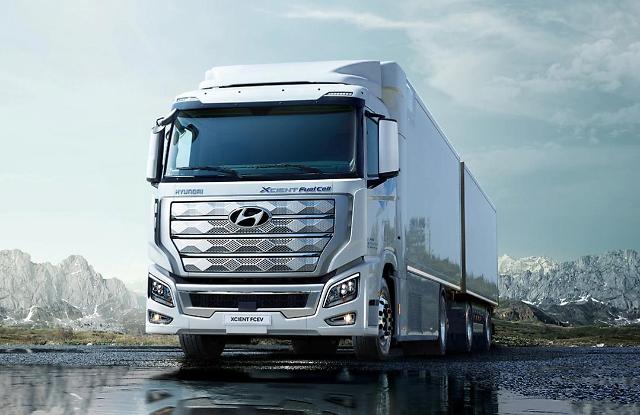 SEOUL -- South Korea's Hyundai auto group unveiled a new roadmap for fuel cell trucks, saying it would produce an upgraded model capable of traveling up to 1,000 kilometers (621 miles) on a single charge. The group started shipping the first batch of hydrogen-powered heavy-duty trucks to a client in Switzerland in July.

Hyundai has modified its Xcient truck to produce a fuel cell model capable of delivering a travel range of about 400 km on a single charge. The Xcient fuel cell truck is powered by a 190-kW hydrogen fuel cell system. Seven large hydrogen tanks offer a combined storage capacity of around 32.09 kilograms of hydrogen.

The group said it would produce a new model with a 400-kW hydrogen fuel cell system in the next few years as well as a 46-ton tractor capable of traveling 1,000 km on a single charge. "Hyundai will be reborn as a company that provides hydrogen-powered vehicle solutions in Europe, the Americas and China," said Hyundai's commercial vehicle division head Lee In-cheol.

By 2030, Hyundai aims to sell 25,000 fuel cell trucks in Europe, 12,000 in the United States and 27,000 in China. In the U.S. market, the group will carry out the demonstration of fuel cell trucks with a local logistics company for one year from July next year.

Hyundai's concept for a new fuel cell truck, HDC-6 NEPTUNE, will be shown at a commercial vehicle show in Atlanta in October. The group leads a government campaign to replace combustion engines gradually with hydrogen fuel cells and electric batteries. South Korea has unveiled a roadmap to secure its firm leadership in the global market by producing 6.2 million fuel cell vehicles by 2040.