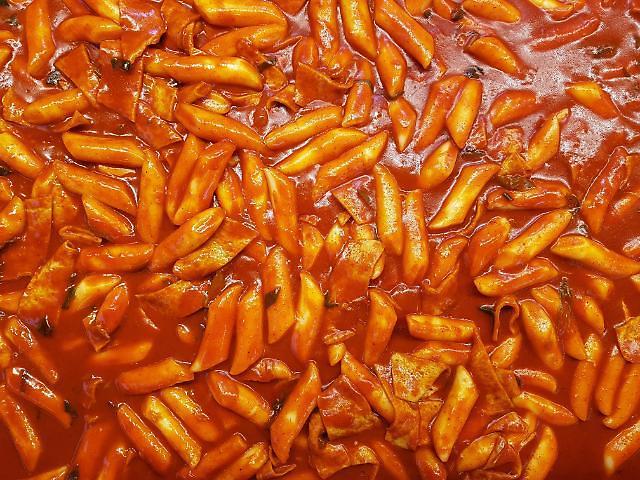 In a September survey of about 10,000 people, conducted by Seoul City, Tteokbokki received the largest number of votes to become the menu favored by people who feel the need to be comforted. "Whenever life tries to bite me, I cook myself some Tteokbokki. The nostalgic taste calms me down and gives me the energy to live on," Kim Ji-hoon, a 38-year-old businessman living in Seoul, told Aju news.

Tteokbokki can be found everywhere in South Korea. Different variants of the spicy rice cake menu are sold at premium restaurants, local snack bars and food stalls on the side of streets. Some Tteokbokki menus are popular in hotels as a room-serviced menu.

Many South Koreans remember Tteokbokki from their very early childhood years. It is common to see elementary school students run around with a cup of red rice cakes that cost about 1,000 won (0.87) while businesswomen talk off their stress while eating extremely spicy Tteokbokki and Soju, Korea's iconic distilled liquor, after work.

In traditional cookbooks published in the late 19th century, Tteokbokki was described as rice cakes stir-fried with soy sauce and seafood ingredients such as sea cucumbers and abalones. Other Tteokbokki menus were described as a dish of stir-fried rice cakes, beef and vegetables seasoned with say sauce.

The traditional menu was recreated into a dish of rice cakes smothered in sweet and spicy sauce by Ma Bok-rim in 1953, just after the Korean War. She had invented a spicy menu after she tasted one of the rice cakes which she accidentally dropped in a boiling pot of fermented black bean sauce. Ma's recipe became a nationwide hit that still captures the taste buds of South Koreans.