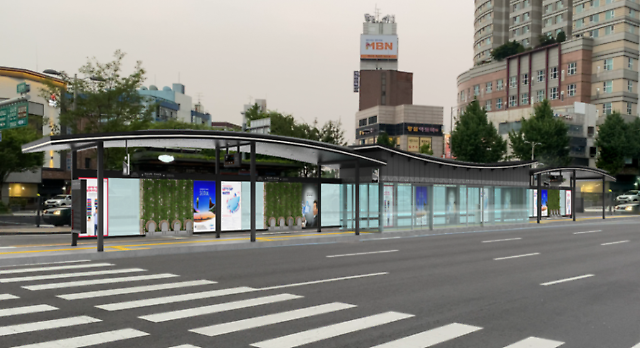 The installation of smart shelters on a trial basis is underway at ten places on Seoul's exclusive median bus lanes. Starting next year, Seoul will attract private investment to set up 373 smart shelters by 2023. Private companies will manage facilities installed with intelligent CCTVs and emergency bells while making a profit through the operation of advertisements.

Experimental smart shelters will be installed in various options and forms, depending on the number of passengers, routes and functions, to serve as a testbed for the introduction of a future transportation system that would include an integrated remote control system and an automatic stop guidance system.

"We will do our best to build a world-class public transportation system through smart shelves based on advanced IT technology and information, and to meet the heightened expectations of citizens," said Hwang Bo-yeon, a Seoul city official in charge of urban transportation.

There are roadside exclusive bus lanes and median lanes for fast and safe bus services. As smooth driving on roadside exclusive lanes was often interrupted by other vehicles, Seoul has gradually expanded the establishment of exclusive median bus lanes, along with electronic fare payment, service linkage with subways and a transport information system.