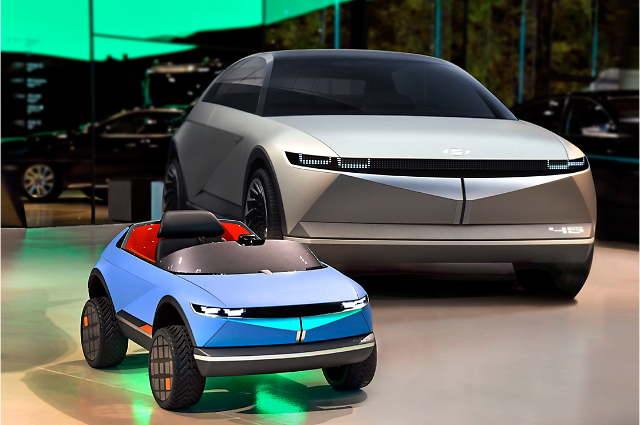 
SEOUL -- Hyundai Motor, a leading carmaker in South Korea, has showcased a mini-sized electric vehicle for kids that bears the design of "45," a concept model revealed at a global motor show in 2019.

According to Hyundai's statement released through its news blog on October 27, the single-seat mini electric vehicle is packed with two DC motors capable of moving it at a maximum speed of seven kilometers (4.3 miles) per hour.

Another fun feature is Hyundai's emotion adaptive vehicle control (EVAC) technology that allows the mini car to react to the laughter of riders. More information about Hyundai's laughter-activated driving technology would be disclosed later.

In August, Hyundai launched its new IONIQ brand for three EV models installed with a dedicated battery platform called Electric-Global Modular Platform (E-GMP) that can cover a distance of more than 450 kilometers in a single charge.

The production of electric vehicles installed with E-GMP signals the start of the auto group's full-fledged campaign to replace combustion engines gradually with hydrogen fuel cells and premium electric batteries. The first model will be IONIQ 5 midsize crossover utility vehicles to be unveiled in 2021. Hyundai will introduce its IONIQ 6 sedan in 2022 and a large SUV in early 2024.