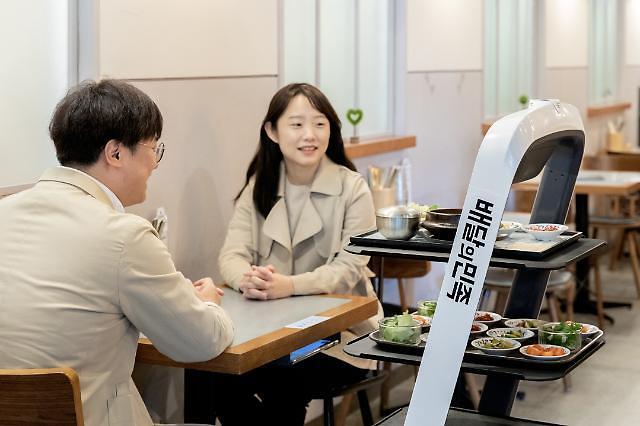 SEOUL -- Serving robots that deliver food to the table of customers at restaurants are changing South Korea's dining culture, drawing a positive response from customers and cost-conscious store operators at a time when a COVID-19 pandemic created a new social trend of non-contact or non-face-to-face.

Dilly Plate, developed by Woowa Brothers which operates the country's top food delivery service app Baedal Minjok, is a serving robot that can carry food up to four tables at a time. It can navigate itself inside a restaurant and take evasive action when it approaches a customer or obstacles. A serving robot rental program was launched in South Korea in November 2019 for a monthly fee of about 600,000 won ($530).

Woowa said in a statement on October 28 that 241 serving robots have been deployed at 186 restaurants since November 2019. The company said that its robots were lauded for improving the efficiency of store work and drew positive feedback.

"It was hard for me to provide proper services for customers dining inside because I had to cook, pack and serve at the same time. I feel much easier to operate my shop after adopting Dilly," an unnamed fried chicken store operator in Incheon west of Seoul was quoted as saying.

"Customers feel very curious toward Dilly and become attracted to it. It made my store very competitive thanks to the trending non-contact culture," said a hotpot dish restaurant owner in the southern port of Busan.

Woowa's robot business team head Kim Yo-seob said that serving robots were designed to create an environment where store owners and servers can concentrate on improving services and increasing the efficiency of operation.

Woowa has led the development of various delivery robots. After a successful test operation at a university campus in Seoul, Woowa launched a food delivery service in August this year using a six-wheeler version of Dilly that travels through outdoor environments such as an apartment complex. In May, Dilly Tower capable of using elevators inside an apartment building or an office building was tested for the delivery of drinks and snacks.

The global service robot market grew strongly in 2019 by 32 percent from $8.5 billion to $11.2 billion, according to the International Federation of Robotics (IFR), a non-international profit organization. Robot workers are widely being adopted at hospitals and hotels to deliver medication or room services. IFR analyzed that the global service robot industry was not affected by the pandemic.