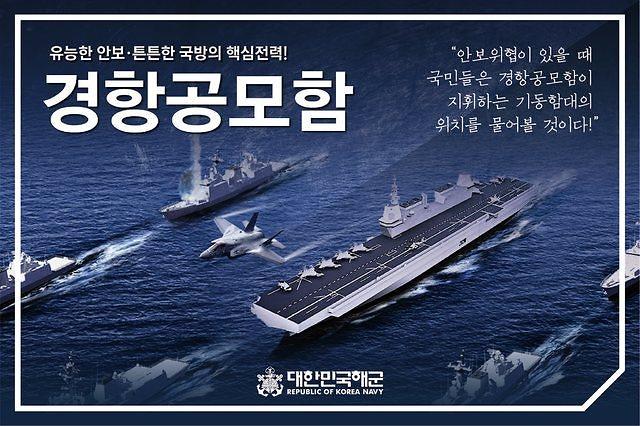 A defense buildup program unveiled in August included the development of a 30,000-ton light aircraft carrier. The defense ministry has launched a research project to see if its Dokdo-class landing ship can be revised to load vertical landing combat jets. Boo Suk-jong, chief of Naval Operations, told a parliamentary committee on October 15 that the first aircraft carrier could be deployed in 2033. When asked about the type of aircraft, he said a decision would be made later.

The defense ministry aims to start basic design in 2021. The ministry's Defense Acquisition Program Administration (DAPA) has selected seven organizations including state-run research institutes, Pusan National University and LIG Nex1 to preemptively secure core technologies such as coating materials that protect the deck, the simulation of aircraft take-off and landing, an ammunition transfer system and the reduction of underwater radiated noise.

The military apparently favors F-35Bs. "Nothing has been decided at the moment, so no pilots or mechanics have been trained, but we will train them together in the process of weaponization." Air Force Chief of Staff Lee Seong-yong tested in parliament on October 15.

The F-35B armed with two precision-guided bombs and two air-to-air missiles can capture a ballistic missile some 1,300 kilometers away using the Active Electronically Scanned Array (AESA) system that can spread signal emissions across a wider range of frequencies, allowing aircraft to radiate powerful radar signals while still remaining stealthy.

As an alternative, F-35Cs were mentioned. The model features large wings that can be folded and can carry 8,960 kilograms of fuel for a long-term operation. However, Navy officials think F-35Cs require aircraft carriers with wide decks and trained pilots who can use ejectors.

Defense firms support the construction of bigger aircraft carriers carrying the variant of a home-made KF-X fighter jet. Korea Aerospace Industries (KAI), the sole aircraft maker in South Korea, plans to deliver the first prototype in the first half of 2021. The KF-X project is aimed at manufacturing 120 fighter jets. Shin insisted that home-made planes are inefficient in terms of price and performance as carrier planes should be modularized and have a strong skeleton and landing gear.