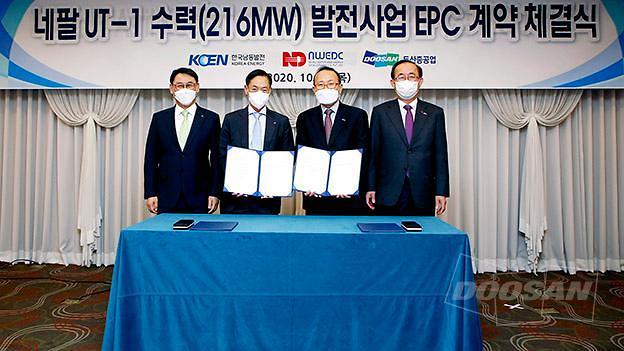 
SEOUL -- Doosan Heavy Industries & Construction, a key contractor in South Korea's energy industry, will participate in a project led by a consortium of Korean companies to build a water power plant with a capacity of 216 megawatts on a river north of Kathmandu, Nepal.

Doosan Heavy said it has signed a deal with Korea South-East Power, a power plant operator that controls 50 percent of NWEDC, a special purpose company. Doosan will be responsible for construction, turbines and power generators in the Upper Trishuli-1 hydroelectric project in Nepal.

"With this order, Doosan Heavy Industries & Construction's eco-friendly energy business, including offshore wind power and hydrogen, will gain more momentum," Doosan Heavy's EPC BG head Park In-won said in a statement on October 29. "As opportunities to participate in domestic and foreign markets are expected to expand in the future, we will make efforts to speed up localization of related equipment and design and revitalize related industries in South Korea."