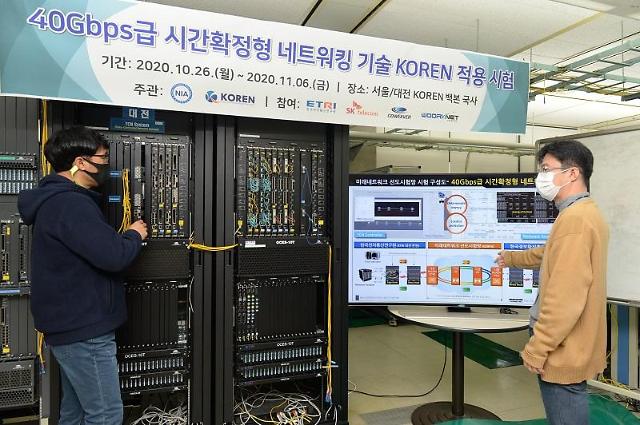 
SEOUL -- South Korean researchers have upgraded their long-distance data transfer technology that can ensure ultra-low latency and nearly lossless performance. They aim to deliver data without loss in the event of a disaster and multiple network failures for the establishment of next-generation network infrastructure.

The state-funded Electronics and Telecommunications Research Institute (ETRI) said that it has successfully transmitted data at the capacity of 40 gigabits per second back and forth between a node in Seoul and the central city of Daejeon some 145 kilometers (90 miles) away.

Even when traffic was heavy, ETRI said it has reduced latency down to four microseconds and increased the speed of data transfer to 10 gigabits per second. The data transmission capacity that can be processed on one chip was increased to 40Gbps.

Latency is the amount of delay it takes to send data from one point to the next. ETRI's new deterministic network (DetNet) technology minimizes the loss of data by maintaining ultra-low latency. Because data files are transferred at lightning speed, the new technology ensures the transfer of flawless data even if a node breaks down during the process.

"We have provided an opportunity to lead the shared growth of the convergence industry, along with economic effects" by securing core technologies early for ultra-low latency and lossless packet delivery, said Cheung Tae-sik, a senior ETRI researcher.

For commercialization, ETRI said technology has been transferred to two domestic companies, Coweaver and Woorinet. The institute has been working on the terahertz (THz) frequency band for 6G. THz is a unit of frequency defined as one trillion cycles per second.

As a frontrunner in disseminating 5G mobile services, South Korea aims to achieve the world's first commercialization of 6G mobile telecommunication in 2028. Because 6G is five times faster than 5G, scientists say it will open a completely new era. The Seoul government has proposed a state-sponsored preliminary feasibility study to develop core technologies for the commercialization of 6G.

ETRI has developed a 400 gigabits per second-class optical transmission and reception engine capable of providing real-time high definition video streaming for some 100,000 viewers simultaneously. The optical engine was designed especially for data centers that house thousands of servers.